SaladPower is a product that was created after the company’s founders went around New York City looking for juice only to find two common themes: high sugar and high price. They decided to start SaladPower to create products that were lower in sugar and higher in vitamins than what they saw on the store shelves. 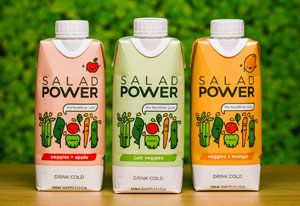 The company’s website, which not only calls out other players in the space as “misleading” but also offers a somewhat misleading competitive label comparison based on anecdotal evidence, really puts the focus on SaladPower’s better ingredients and lower sugar. But in reality, three of the four varieties list sugar content that is on par with at least some of the varieties offered by the companies on the chart. Comparing averages of the line is unfair, especially considering that their lineups are broader and include straight juices, such as apple and orange, that are naturally high in sugar. And after all, you’re typically just one product, not a composite that represents the average of an entire product lineup. In any event, we strongly suggest that they rethink this approach and consider the factuality of this and other information on their website.

Putting that aside, let’s talk about the actual product offering from salad power. These products use concentrated juice that is reconstituted with water using levels that allow the product to achieve 100 percent juice content. Just Veggies, which is their lowest sugar product, includes water, carrot, kale, spinach, tomato, celery, green bell pepper, and cucumber (along with added vitamin C). It’s good, but not great, with flavors that aren’t as bright and fresh tasting as many of the premium or high pressure processed (HPP) juices out there. From there, adding fruit flavors to the mix results in something that’s reminiscent of V8 Splash: it’s lacking in freshness and balance. Honestly, we feel as though these products need a lot of formulation help if they are going to lure drinkers away from other juices -- or from an actual salad.

On the outside, our feelings, unfortunately, don’t change: the product needs visual work, too. Not being able to see the liquid is going to be a challenge, as is being a shelf stable premium player trying to compete against perishable brands. If you look at the premium prices for refrigerated juices across the entire spectrum of the category, it’s widely understood that refrigerated will be more expensive than shelf stable. It’s also widely believed, whether it’s true or not in any particular case, that these products are better for you. But we don’t see that supported here.

Furthermore, making the consumer think about salad, which is rarely, if ever, on the same level with a beverage in terms of refreshment and flavor, might undermine the brand’s ability to connect with the consumer in a meaningful way.

Overall, SaladPower seems like a product that has good intentions -- the market certainly could use lower sugar offerings -- but the execution feels rough and comes up short when comparing it to what’s already on the market today. While low sugar and vitamin content are certainly important, we feel as though SaladPower is asking consumers to compromise flavor and brand to get it. And that rarely works in this business.