After being acquired last year by private label tea giant Harris Freeman (and placed into a new subsidiary called Pure Steeps), it should be no surprise that Secret Squirrel is expanding from cold brew coffee into cold brew tea. 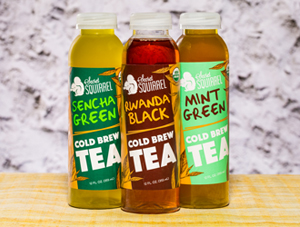 Cold brew tea is something that’s been tried by several other players, such as Suja and Harmless Harvest, without much in the way of commercial success. One might argue that those products, which were bolted onto a cold-pressed juice brand and a coconut water brand, respectively, weren’t exactly complementary to their company’s core offering. In the case of Secret Squirrel, cold brew tea seems slightly more logical, especially in that other players, all the way up to the big guys like Starbucks, have established the ability to play in both coffee and tea.

For their cold brew tea offering, Secret Squirrel has taken somewhat of a purist approach. The three blends, which include Rwanda Black, Sencha Green, and, for the only flavored variety, Mint Green, are very lightly sweetened and have rather assertive tea flavors. Cold brewing the tea makes for something that tastes less tannic than hot brewed tea, but it’s the use of processing, which eliminates the need to add citric acid (or a similar acidifier) that makes the more meaningful flavor difference.

When it comes to the three flavors that we sampled, we’re left feeling as though the lone flavored offering, Mint Green, is the winning direction. It successfully creates something that’s light, refreshing, and has of flavor. The Sencha Green and Rwanda Black products are fine examples of straight brewed tea, but they have a more niche audience. Adding some additional flavoring element would be worth considering.

The branding and design of these products , like the rest of the Secret Squirrel line, very polished and appealing. These look like very credible and well-crafted products and they’ve done a nice job of utilizing the Secret Squirrel brand to give the line its own identity but still feeling like part of the family.

All in all, we really like the concept of a Secret Squirrel cold brew tea line. The execution of what they’ve created is thoughtful and well-done, but we feel as though they could broaden their reach if they adapt the flavor lineup a bit.