When we first tried Sunup, the product, which is made with unroasted green coffee, was packaged in a glass bottle. With the messaging feeling disjointed and somewhat unclear, it felt like it needed a lot of work. 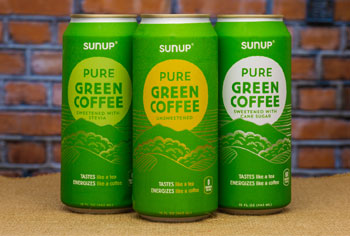 Now, in the Summer of 2017, the company has updated the packaging and added two new varieties, Sweetened with Cane Sugar and Sweetened with Stevia, to go with the original (now called Unsweetened). Utilizing a 15 oz. can with a bright green backdrop, it certainly has a more vibrant and eye-catching appearance.

Despite this overall visual improvement, however, we’re not sure that it sufficiently communicates what the product is to the point where the product will be appealing to consumers. The text on bottom of the can states “Tastes like a tea. Energizes like a coffee.” but it doesn’t really describe the experience of all that accurately. Plus, 15 ounces feels like too much of an ask for new consumers to dive into.

As for the product offerings, creating varieties based on the use and type of sweetener is an approach that seems to make the consumer’s decision more challenging rather than improving options. Sweetener types have become a thorny issue -- and we wonder if Sunup shouldn’t, at least for now, get behind the one that it thinks will bring the most short term success. If they did this, a flavored offering, which might also help the company’s chances of success, would be a logical add-on.

After tasting the liquid, we feel even more strongly about the need for flavors. The unsweetened variety tastes like black tea that hasn’t been fully steeped, which, at least to our palates, feels incomplete. It could certainly serve as the base for something, but the addition of a sweetener, either sugar (16g of sugar and 25 calories per can) or stevia (0 sugar and calories), doesn’t totally make up for it. However, the sugar sweetened variety is presently their best tasting flavor.

In the end, moving to a can and adding new flavors is a step forward for Sunup. However, there’s still a bigger step forward that’s needed: nailing the flavor lineup and, more importantly, figuring out a way to engage the consumer and get them to understand what green coffee is and why they should drink it. We expect the latter to take some time, but the former should definitely be something that they continue to explore in the short term.