Sunomi, previously known as Sip City, is a line of sparkling switchel beverages that is a much improved version of its predecessor.

The brand now offers three flavors -- Turmeric, Orange, and Lemon -- all of which feature apple cider vinegar (ACV). Unlike the brand’s prior product line, which used city names (e.g. “The Boston”) for the flavors, these are very intuitive and straight to the point. 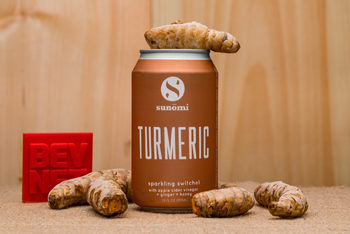 While we don’t have cans of the original products to sample side by side with these, the nutrition facts panels for Sunomi have fewer calories (50-60, depending on flavor) than the Sip City products did, which leads us to believe that there was some adjustment to the actual formulations as well. In addition, the first two ingredients are water and carbonated apple cider vinegar (Sip City listed carbonated water and apple cider vinegar).

The resulting formulations have plenty of apple cider vinegar flavor, are crisp from the carbonation, and have some nice depth provided by the added accent ingredients. We appreciate that they use real ingredients rather than extracts and it definitely makes a difference in the quality of the product.

They’ve also done a nice job of creating some variety across the three flavors. Turmeric, which also features black pepper, ginger lemon juice and cayenne pepper, has some nice spice that counterbalances the tartness of the ACV. Orange has notes of orange juice and honey (a common ingredient in all three) that makes for a slightly sweeter experience. Finally, there’s Lemon, which is the lightest tasting of the trio thanks to the sharpness of the lemon juice helping to cut the tang of the ACV.

At this point, we think that these products are quite good as far as taste is concerned, but we do think there’s an opportunity to make them a bit lighter. Aside from the obvious move of reducing the calories (which never hurts nowadays), we think a slightly lighter flavor profile would increase the line’s overall appeal.

On the branding and design front, the new update is definitely a step forward. Sunomi, which, according to the label, is a Japanese word that “loosely translated means vinegar drink,” is a nice name and, since it starts with “S”, allows the brand to utilize the same icon that was a part of the original.

Otherwise, the product has a metallic look thanks to a semi-transparent sleeve label. It’s minimalist in design, with a large callout for the flavor name and secondary text that explains what the drink is. While the hierarchy is reversed, we think it’s sufficient and the product is still intuitive.

If there’s any criticism of the new design, it’s that we think it has a bit less personality and more of a technical feel. However that’s something that they can compensate for as they build out the brand.

Overall, Sunomi is a very big update and upgrade from what Sip City has previously offered.