Having launched in Santa Cruz, Calif. a little over a decade ago, Verve Coffee Roasters is definitely not a newcomer to the specialty coffee scene. But until now, they’ve stayed out of the ready-to-drink game. 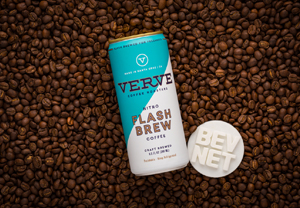 Rather than jump into the RTD space with a product that’s the same as what’s already out there, Verve is trying a different approach. According to the roaster, Flash Brew starts with a blend of direct trade coffees, including Ethiopian Natural Mormora and Southern Colombian Farmlevel. The coffee is then prepared using a proprietary hot brewing process in an oxygen-free environment. Finally, it is flash chilled -- the “flash” in Flash Brew -- and infused with nitrogen.

The end result is very smooth and clean in a way that’s not dissimilar to what we’ve tasted from cold brew. However, there’s also something different about this product; it has a brighter and slightly lighter body than what you might find in a typical cold brew. But at the end of the day, we think that flash brew vs. cold brew will be a matter of personal preference as opposed to one being superior (or inferior).

On the packaging front, the product comes in an 9.5 oz. can and looks the part of the premium coffee set. Plus, they’ve done a great job of using their existing brand equity in a new package format.

Still, we can’t help but wonder what sort of challenges will come with promoting “flash brew” front and center. Consumers who sees this will likely have a plethora of questions about the product when the underlying flavor isn’t all that different to the average palate. It’ll require a lot of effort to educate consumers on something that shifts the value proposition laterally as opposed to forward -- and we think this will be pretty challenging.

Fortunately, we think there’s a pretty simple solution, which would be to market this as “Nitro Coffee,”which is certainly gaining traction as an offshoot of cold brew, with “Flash Brewed” being a smaller and less dominant element. We believe that most consumers are less concerned with the exact details of  processing and are ultimately more concerned with the flavor and quality -- both areas in which this product excels.

Lastly, we think that Verve should quickly think about out how to follow this up with additional SKUs. Being a single SKU brand is tough and there are several different ways they could approach this with new flavors, formats, etc.

Overall, we do think that Verve has done a really nice job creating something that’s innovative, high quality, and downright tasty. But we also believe that there’s some finessing that could be done to help this product reach its full potential.