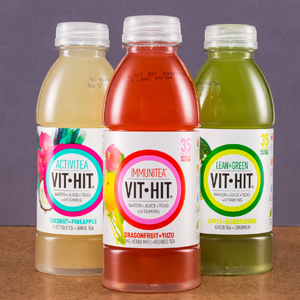 Hailing from Ireland, Vit-Hit is a blend of water, juice, tea, and vitamins that is marketed as a low-calorie, naturally sweetened beverage.

For their U.S. offering, they’re producing the product in the States rather than importing it, which is certainly a smart move for economic reasons. However, the packaging that they’ve chosen to use here, a stock 16.9 oz. plastic bottle, is, at least to our American eyes, visually less appealing than the bottle that they are using in the UK. This is only an issue in that the bottle directs you to their website and social media accounts, both of which show this better looking bottle.

Otherwise, the branding and messaging are clean and simple, but, at least in the U.S., this feels like the type of product that would blend in rather than stand out. The brand feels technical in its message, with a heavy emphasis on the functional elements. What it lacks is something that’s approachable and memorable. And aside from it being obvious that it’s low-calorie (something they’ve called out in large type in the top right corner of the label), it’s not overly clear why this product is better than any other vitamin- or electrolyte-fortified product (and there are certainly no shortage of those).

We’d say the same about the liquid inside the bottle. Being labeled as a supplement and having a rather long list of ingredients sets the stage for what is a complex and vitamin-heavy flavor that has a stevia finish. With the exception of Apple + Elderflower, which tastes different due to the elderflower flavor, the fruit flavors taste rather generic. And none of the flavors have any noticeable tea taste. In any event, the ultimate point of this is that the flavor of the product is not, on its own, a reason to consume this product.

This leaves us with the product’s functionality. It features a laundry list of vitamins and electrolytes, many of which are 100 percent of the RDA. In addition, each flavor has tea extract (or in the case of Mandarin, coffee bean extract). But again, we’re left feeling as though they’ve failed to really provide a clean explanation of what all of this is for.

All of the above being said, we feel as though what Vit-Hit offers is a loose “good for you” drink. There is certainly no shortage of those, so why drink a Vit-Hit over the competition? That’s the piece that’s really missing for us. It’s not flavor or packaging, so is it better functionality? That’s a strategy that hasn’t really worked out well for many other upstart functional brands.

In the end, Vit-Hit seems to have gone for literal translation of their U.K. offering, but with a downgraded package. Given the intense competition in the U.S. for functional beverages, this is an approach that’s going to make for many challenges for the brand. If they want to succeed here, they’re going to need to come up with an approach that delivers value and differentiation that matches the needs of the market. What we see right now, unfortunately, falls short on those fronts.