Review: Wandering Bear’s Vanilla with a Splash of Coconut Milk

Covers Products: Vanilla with a Splash of Coconut Milk

Wandering Bear Cold Brew recently extended its product lineup with a third flavor, Vanilla with a Splash of Coconut Milk. The product, which is USDA Organic and has 20 calories per container, joins its other two varieties, Straight Black and Mocha Coconut. 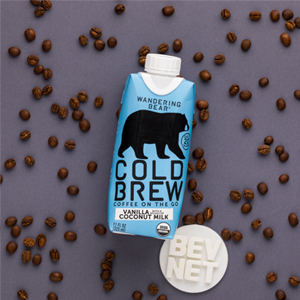 Typically, vanilla flavored coffee drinks simply don’t stack up well against flavors like mocha or even black coffee as they tend to have an overly artificial flavor to them. However, we think that Wandering Bear’s use of coconut cream helps this product avoid that fate (it’s the same approach used on their Mocha Coconut).

The resulting product is coffee forward followed by notes of vanilla and coconut. There’s no added sweetness, but none is required. It’s slightly rich in body and a tad more viscous than normal coffee, so we think there’s plenty of flavor just as it is. And like any good cold brew out there, it’s very smooth from start to finish. The only obvious knock on this product will come from people who simply don’t like coconut, but that’s a matter of preference as opposed to something that we’d view as an objective flaw.

Wandering Bear is packaged in an 11 oz. Tetra Pak with a Dreamcap closure -- just like the rest of the on-the-go lineup. For this flavor, they’ve chosen a light blue backdrop, which is fine in as much as it’s a standard color to denote vanilla. We’re fans of the illustrated style of the brand as well as the overall aesthetic that they’ve created. However, the use of a Tetra Pak doesn’t quite feel as premium as glass or even cans used by the competition.

Overall, Wandering Bear has done a nice job with this extension. It’s true to the level of quality that the brand has established thus far, and having a third flavor definitely makes the line feel more complete.