Zinger Shots are a line of USDA Organic shelf stable shots that feature intense flavors in a small 2.4 oz. format. 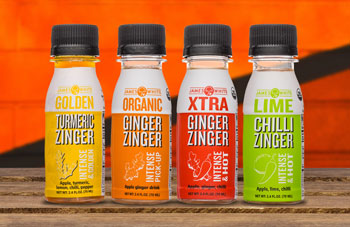 One of the key points of differentiation for the brand is that it is a shelf-stable product. There’s an increasing number of shots going after the cooler, but Zinger Shots is one of only a handful that’s trying to offer a better-for-you shot that can be sold at check out.

From a taste perspective, the four varieties that we sampled are intense and loaded with spicy flavor. The base ingredient in all of the SKUs is apple juice, which is more noticeable in some of the flavors than others. In the case of the Organic Ginger Zinger, it’s one of only four ingredients (ginger juice, water, and ascorbic acid being the other three). Fortunately, the spice of the ginger quickly takes over.

The Xtra Ginger Zinger is the spiciest of the bunch. It has added chilli flavoring on top of the base of water, apple juice, and ginger juice. The result is something that’s spicy, but not too spicy - although it definitely lingers.

Golden Turmeric Zinger is the mildest offering. It features apple juice, turmeric juice, lemon juice, chilli flavoring, and black pepper. The turmeric really takes center stage and keeps both the ginger and the apple juice under control and balanced. This was definitely our favorite flavor of the four that we sampled.

Lime Chilli Zinger is the only flavor that doesn’t contain ginger. Instead, it’s made with apple juice, lime juice, and chilli flavoring. The result is really heavy on the lime flavor, with secondary notes of sweet and spice. It’s tasty, but we’d probably reach for one of other SKUs.

On the packaging front, there’s definitely some work left to do. The label is busy and, at least when it comes to the two ginger SKUs, confusing and inconsistent (why is one called “Organic” when the entire line is organic?”). With the placement of “James White” at the top of the label, it’s not overly clear that the actual branding is Zinger. What we’d like to see is a label that reads from the top down and doesn’t have the change from a white to a colored background in the middle of the flavor name.

Overall, Zinger Shots are enjoyable, flavorful, and fill what is currently some white space in the market.