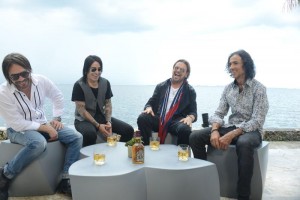 Legendary Rock Band Teams Up with Chivas in Multi-Year Collaboration

NEW YORK, Nov. 4, 2013 /PRNewswire/ — Chivas Regal partners with new Brotherhood members Mana, the biggest Latin rock band in the world, to take Chivas Scotch whisky drinkers on an exclusive musical journey through an inside look at the band. Intimate documentary videos will follow Mana as they record their next album and plan for their next world tour. Through the “Chivas Band of Brotherhood” program, the public will also have opportunities to win one-of-a-kind prizes, including dinner with the band and attendance at a private studio session.

“Chivas understands what success, friendship and generosity mean for the modern gentleman, and no band better exemplifies that than Mana,” says Laurent Cutier, Brand Director of Scotch at PRUSA. “Over their twenty years of success and an estimated 35 million records sold, Fher, Alex, Sergio and Juan continue to embody these core values and that is why we’re welcoming them as the newest members of our Chivas Brotherhood community.”

Those who join the Chivas Brotherhood at www.chivasbrotherhood.com will have access to exclusive content like behind the scenes footage and sneak peeks on how Mana apply their collaborative spirit of brotherhood as they develop their next album.

“We attribute our years of success to a strong sense of friendship supporting each other through good and difficult times with profound loyalty,” says Fher. “We have a lot in common with Chivas and we think both our fans will enjoy the exclusive offerings and content that will come from this exciting partnership.”

About Pernod Ricard USA
Pernod Ricard USA is the premium spirits and wine company in the U.S., and the largest subsidiary of Paris, France-based Pernod Ricard SA, which employs more than 18,000 people worldwide and is listed on the NYSE Euronext exchange (Ticker: RI).

About Mana:
– The most influential Latin Band of all time
– 35 million albums sold
– Over 45 #1 radio hits worldwide
– Latin band with the highest boxscore: 12 million tickets sold
– Unprecedented record of sold-out shows for a band at the Staples Center: 11 in total
– The band will have a star on the Hollywood Walk of Fame on 2014

The story of Mana begins in 1986 when four friends from Guadalajara, Mexico decided to get together and form a band that would be called Mana – meaning positive energy in Polynesian – in order to merge rock with Latin and Caribbean rhythms.

In 1995 they released “Cuando los Angeles Lloran” (When Angels Cry), in which the band not only reinforced the success it had already achieved, but showcased the lyrical and sound evolution of the group. In that same year, they formed an Environmental Foundation called Selva Negra, to contribute to environment awareness, an important cause to the band.

In 1997, they released “Suenos Liquidos” (Liquid Dreams), the band’s fifth album. It took them on the largest U.S. tour by a Latin artist to-date. Once this tour was completed, the band was invited by Carlos Santana to participate in his new project. The result was a song called “Corazon Espinado” (A Heart with Thorns) which placed #1 in several charts in Europe, Asia and America.

In 1999, Mana released its “MTV Unplugged” special, resulting in the most successful album in the “Unplugged” format by a Latin artist.

With “Revolucion de Amor” (Love Revolution) in 2002, the band merged rhythms in a brand-new way, and collaborated withCarlos Santana and Ruben Blades.

In 2006, the band released “Amar es Combatir” (Love is to Combat). Five singles were released, keeping Mana as leaders on the charts. Most notable was the song “Bendita Tu Luz” (Blessed Your Light), a collaboration with Juan Luis Guerra.

On April, 2011 Mana returned with a more experimental album, “Drama y Luz” (Drama and Light). The production included strings and metals, and was made in conjunction with a documentary of their album-making process.

The Drama y Luz World Tour was their most ambitious tour to-date and led them to the most important venues in the United States, Latin America, Spain, Italy and Israel. With this tour, Mana set a record at the Staples Center for the most performances at this arena in its 13-year history (surpassing Britney Spears) with 11 sold-outs shows. They were also invited to the Rock in Rio Festival 2011 (Brazil) and 2012 (Madrid) where they were the headliners of the night.

Last year, the band made their mark in concrete as they were inducted the Hollywood Guitar Center’s Rock Walk. They are also confirmed to receive a star on the Hollywood Walk of Fame next year.

Currently, the band is working on their upcoming album.