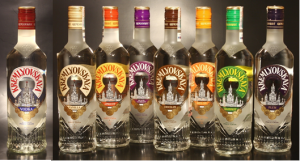 SPI’s decision is part of an overall global strategy to focus attention on its key international portfolio – at the core of which is Stolichnaya® Premium Vodka – by divesting non-primary assets in line with the vision of SPI’s owner, Yuri Shefler.

In 2008 with the separation from Pernod Ricard, until then Stoli’s global distributor, SPI Group decided to take full control of the brand. More recently SPI Group has decided to further strengthen such control by setting up its own importing company in the US. The New York based company was setup earlier this year and will formally commence distribution on January 1st, 2014.

SPI Group has owned Kremlyovskaya (or Kremly as it is known amongst its loyal consumers) since 2003 and has secured the ownership of the trademark across nearly 200 countries throughout the world.

Classic International has been established by a private financial trade group with a purpose to develop select alcoholic brands. The company has already obtained a license to sell the brand in Russia from the State Enterprise “Torgoviy Dom Kremlevsky”.

“Following the recent sale of our property development business in Russia, we continue to consolidate efforts on the core business and new exciting opportunities”, says Val Mendeleev, CEO SPI Group. “The capital generated by the sale of the Kremlyovskaya brand will be deployed to acquire premium wine assets”.

Kremlyovskaya was the first international post-perestroika premium Russian vodka. Created in the early 1990s, with an attractive premium bottle designed by a renowned UK design studio Claessens, Kremlyovskaya, at its peak, sold over 5 million 9L cases. The Kremly brand today can count on an extensive range of distinctive flavours, a segment in the vodka category that has enjoyed tremendous growth in the last decade – plum, melon, grapefruit, chocolate, apricot, blackcurrant and vanilla.

Many will recall Kremly’s frequent appearance on Fashion TV, building its glamorous position in the premium vodka world thanks to its popular advertising campaign called “Toast of New Russia”, thus becoming the symbol of modern Russia.