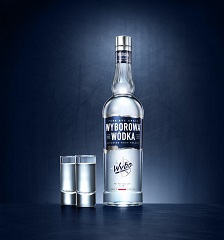 PARAMUS, N.J., Sept. 24, 2014 /PRNewswire/ — In celebration of National Vodka Day on Saturday, October 4th, Andrzej Szumowski, President of the Polish Vodka Association, will introduce the pride of Poland to the U.S. with the launch of Wyborowa Wodka in collaboration with The Wyborowa Company, part of the Pernod Ricard Group and Crillon Importers Ltd.

Wybo, the #1 Polish vodka in Poland*, is produced with pure rye grain exclusively from Poland, earning the highly esteemed Polish Vodka Seal. Committed to using only the highest quality ingredients, the Polish Vodka Seal is awarded to vodka that is produced with Polish potato or traditional grains including rye and wheat, creating the purest form of vodka and excellent taste.

“Poland is regarded as the birthplace of vodka, and we are delighted to celebrate the spirit of our culture in the U.S.,” said Andrzej Szumowski, President of the Polish Vodka Association. “Vodka is the pride of Poland and Wybo represents that beautifully with its high quality and purity – something we should all raise our glasses to!”

Over the centuries, the production of vodka in Poland has become a part of the national heritage which is strongly incorporated into Polish customs and social life. Poland has a long tradition of using high quality natural ingredients in the production of its vodka, which has earned worldwide admirers and a respected reputation for pioneering the spirit.

“We are thrilled to introduce Wybo, and the rich story of the brand, to people throughout the country,” said Henrik Ellstrom, Global Marketing Director at The Wyborowa Company. “Wybo is a national icon in its home country Poland, and we are very proud to be able to offer the brand in the U.S.”

Wybo, created in 1927, is currently sold in more than 80 countries worldwide, and touts more than 20 international awards in addition to winning a Gold Medal in the 2014 San Francisco World Spirits Competition. Wyborowa was the third fastest growing vodka brand in the world in 2013**. Available in a long neck bottle and a newly designed “ripped paper” label in navy blue and silver, Wybo is distilled in 40 small-scale agricultural distilleries in Western Poland and is run through a continuous distillation process giving the vodka its exceptional smoothness.

About Pernod Ricard
Pernod Ricard is the world’s co-leader in wines and spirits. Created in 1975 by the merger of Ricard and Pernod, the Group has undergone sustained development, based on both organic growth and acquisitions. Pernod Ricard employs a workforce of approximately 18,000 people and operates through a decentralized organization, with 6 “Brand Companies” and 80 “Market Companies” established in each key market.

About Crillon Importers Ltd.
Crillon Importers Ltd, under the leadership of Michel Roux, provides the finest spirits, beverages and products from across the globe.Michel Roux is responsible for popularity, success, and in some cases concepts for some of the world’s most renowned spirits, including the successful launch of Absolut Vodka in the U.S.

The company is based in Paramus, New Jersey and urges all adults to consume its products responsibly. For more information please visit www.crillonimporters.com.