CORNELIUS, N.C., Feb. 10, 2015 /PRNewswire/ — Real moonshine is coming back to its roots in NASCAR. Today American Born Moonshine, an authentic, all-American made moonshine brand, announced that it would partner with RAB Racing and Win-Tron Racing to make its first entry into NASCAR. Driver Justin Markswill join American Born Moonshine as they strive to conquer the “triple” this month at Daytona International Speedway. 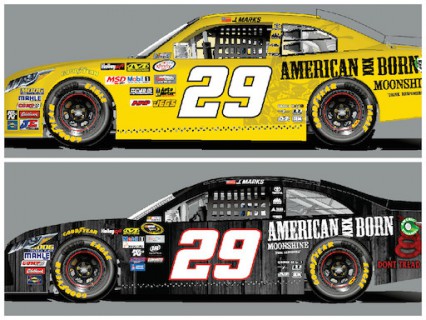 “The partnership with RAB Racing and Win-Tron Racing is an incredible first step for us at American Born Moonshine to join the family of NASCAR and support Justin Marks,” said Sean Koffel, co-founder, American Born Moonshine. “The foundation of our company was built on paying homage to the moonshiners and bootleggers of our country’s past and NASCAR has played a central role in that story.”

American Born Moonshine, was launched by Windy Hill Spirits, a Nashville-based company founded in 2012 by Dillingham and Koffel to bring a moonshine whiskey to consumers that would honor the incredible tradition of American moonshiners. The two were inspired by amazing family moonshine stories and recipes shared by friends and fellow Marines that grew up in and around the Appalachian Mountains. While starting Windy Hill Spirits and American Born Moonshine, Dillingham and Koffel spent a year traveling the Appalachians and the greater South, spending time with families, hearing first-hand accounts of moonshining and bootlegging legends, tasting a lot of great moonshine, and developing an enormous appreciation for the role moonshine has played in American history.

“We built RAB Racing around Justin in 2007 in the ARCA Racing Series,” said RAB Racing owner Robby Benton. “He’s remained a good friend as he progressed through his racing career and I’m proud to have him back in our cars for Daytona. It’s great to bring in a new sponsor to the industry and introduce them to the strength of NASCAR and its loyal fan following. American Born Moonshine is a great fit for the NASCAR demographic and it will be nice to see the roots of our sport finding a way to advertise creatively in the modern era.”

Marks has one career Sprint Cup start at Sonoma Raceway in 2013. In his most recent XFINITY start last August, Marks posted a sixth-place finish at Mid-Ohio Sports Car Course in Ohio. He’s competed in 35 Camping World Truck Series races where he has earned two poles and four top-10 finishes. His sole victory at Daytona came in the GT division of the 2009 Rolex 24 Hours of Daytona. Marks is also co-owner of HScott Motorsports with Justin Marks in NASCAR K&N Pro Series competition and owner of GoPro Motorplex inMooresville, N.C.

“This is the biggest week of the year for NASCAR and our team is ready to take on Daytona,” said Marks. “We are thrilled to partner up with American Born Moonshine and are hopeful that this will be the first of many great runs with them.”

American Born Moonshine looks to continue to support NASCAR and its moonshining and bootlegging roots through select, personal partnerships throughout the sport, including the Official Spirits Sponsorship of Catwalk for a Cause, a Martin Truex Jr. Foundation event in May. They’ll also enter grassroots racing with sponsorship of the Larson Marks Racing World of Outlaws sprint car team.

About American Born Moonshine
American Born Moonshine was founded in Nashville, Tennessee 2012 by Patrick Dillingham and Sean Koffelwith the goal of creating the smoothest tasting most authentic Moonshine Whiskey on the market at any price. The company founders’ wanted to create a moonshine that honors the incredible tradition and rebel spirit of American Moonshiners with the company’s fundamental belief in selling whiskey with a handshake that has been passed through the generations. American Born Moonshine is available in three distinct flavors: Original, Apple Pie and Dixie. For more information on American Brand Moonshine product availability at your local bar or store, drink recipes, and to stay informed on news and updates, please visitwww.AmericanBornMoonshine.com or stay connected with the brand on Facebook, Twitter and Instagram.