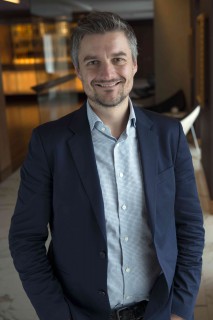 In these roles, Mr. Ivanov is responsible for the global marketing organization and driving the Company’s inter
nationally known portfolio of premium spirits brands ─ including brand equity, architecture, positioning, advertising, packaging, and strategic direction on innovation. He also will serve as a member of the Bacardi Global Leadership Team and report to Bacardi Limited Chief Executive Officer Mike Dolan.

Mr. Ivanov most recently served as the Vice President – Global Category Director of Rums responsible for the marketing vision and premium positioning of the Bacardi portfolio of rums including the iconic and namesake BACARDÍ rum brand. In that role, he developed and launched the “BACARDÍ Untameable Since 1862” global marketing platform and advertising campaign. Mr. Ivanov will remain based at the Bacardi Global Brands headquarters in London.

“With 20 years in consumer marketing roles, and eight years with Bacardi, Dima knows our brands and what it takes to successfully market premium consumer goods. Having led the largest market within Europe, he also brings a perspective of what countries need from a CMO in order to execute brand ideas successfully,” said Mr. Dolan. “Dima’s proven track record of accomplishment is based on great leadership skills, marketing excellence, and a consistent track record within the Bacardi organization.”

Previously, Mr. Ivanov was Managing Director for the country operations of Bacardi in Russia. Under his leadership, the portfolio of Bacardi brands experienced tremendous growth ─ BACARDÍ rum became the fastest-growing rum brand in Russia, MARTINI took the top spot as the #1 vermouth and sparkling wine brand in the country, and WILLIAM LAWSON’S ranked as the #1 whisky brand in both value and volume in Russia. He started his career with Bacardi in 2005 as Marketing Director for the portfolio of premium products in Russia in charge of marketing strategies and execution of all brand activities in the country. He previously worked for Red Bull Russia as Marketing Director, as well as held various marketing and brand management roles of varying responsibility with Pepsi Bottling Group and Procter & Gamble in Russia.

“Having led the BACARDÍ rum brand reinvention and built a strong, results-driven marketing team for Bacardi rums, I look forward to achieving the same accomplishments in this new global role for all our iconic brands, as well as bringing our marketing capabilities to the top-class level,” said Mr. Ivanov.

Mr. Ivanov succeeds Mr. Andy J. Gibson, who will leave Bacardi at the end of March to ensure a smooth transition. We thank Mr. Gibson for his contributions to our world-class brands during his tenure with Bacardi.

Bacardi Limited, the largest privately held spirits company in the world, produces and markets internationally recognized spirits and wines. The Bacardi brand portfolio contains more than 200 brands and labels, including BACARDÍ® rum, the world’s best-selling and most-awarded rum, as well as the world’s most-awarded spirit; GREY GOOSE® vodka, the world’s leading super-premium vodka; DEWAR’S® Blended Scotch whisky, the world’s most-awarded blended Scotch; BOMBAY SAPPHIRE® gin, the top-valued and fastest-growing premium gin in the world; MARTINI® vermouth and sparkling wines, the world’s leading vermouth and the world’s favorite Italian sparkling wines; CAZADORES® 100% blue agave tequila, one of the most popular premium tequilas in Mexico and the United States; and other leading and emerging brands including WILLIAM LAWSON’S®, the fastest-growing global Scotch whisky brand; ERISTOFF® vodka, one of the fastest-growing vodka brands in the world; and ST-GERMAIN®, a super-premium elderflower liqueur.

Founded nearly 153 years ago in Santiago de Cuba on February 4, 1862, family-owned Bacardi manufactures its brands at 29 facilities and sells in more than 160 countries. Bacardi Limited refers to the Bacardi group of companies, including Bacardi International Limited. www.BacardiLimited.com