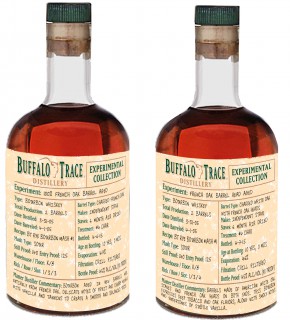 FRANKFORT, FRANKLIN COUNTY, KY (May 19, 2015) When Buffalo Trace Distillery started its whiskey experiments more than three decades ago, one of the first releases was bourbon aged in French oak barrels.  That bourbon was aged ten years and released in 2006, quickly becoming a favorite of both the master distiller and bourbon connoisseurs.

Ten years ago, Buffalo Trace embarked on another French oak experiment, but this time endeavoring one step further – creating two different barrel types, one made entirely of French oak, and another using French oak heads, but American white oak staves.

The barrels were both constructed with Buffalo Trace’s exact specifications as far as size, stave drying, and charring.  The barrel staves were air-dried for six months and the barrels were charred for 55 seconds. Both of these experimental barrels were filled with the same bourbon recipe, known as Buffalo Trace Rye Bourbon Mash #1.

“These bourbons, when tasted side by side, are complementary but yet have subtle differences,” said Master Distiller Harlen Wheatley.  “Both are nice, well-rounded bourbons, but the 100% French oak bourbon has more soft, fruity notes to it, while the bourbon made with the French oak heads and American oak staves offers more of a smoky oak and tannin flavor profile.

It’s interesting to compare these two bourbons to each other and also to our standard bourbon offerings,” continued Wheatley. “These French oak experiments offer a unique flavor profile from our standard bourbon barrels.  That’s one of the things that make our experiments so fun; we never stop learning how subtle changes can alter the taste profile.”

These barrels are part of more than 3,000 experimental barrels of whiskey aging in the warehouses of Buffalo Trace Distillery. Each of them has unique characteristics that differentiate them in distinct ways. Some examples of experiments include unique mash bills, types of wood, and different barrel toasts. In order to further increase the scope, flexibility and range of the experimental program, an entire micro distillery, named The Colonel E.H. Taylor, Jr. “OFC” Micro Distillery, complete with cookers, fermenting tanks, and a state-of-the-art micro still has been constructed within Buffalo Trace Distillery. Buffalo Trace has increased its commitment to experimentation with the recent addition of its Warehouse X. Although small in size, Warehouse X is designed to explore the extent of environmental influences on the flavor profiles of whiskey.