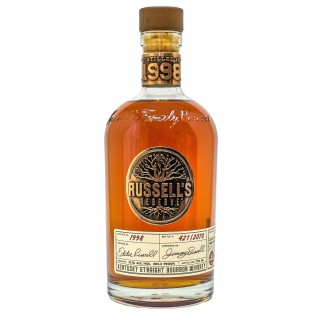 LAWRENCEBURG, KY (October 8, 2015) – The story of Russell’s Reserve® 1998, the rarest offering ever from Russell’s Reserve, has been in the making longer than the brand itself. As the son of the longest-tenured, active Master Distiller in Kentucky, Eddie Russell, a Master Distiller himself, always knew his father would celebrate many milestones at Wild Turkey®.  Although not much gets by Jimmy, Eddie often has a masterful and secretive hand in ensuring the “Buddha of Bourbon” celebrates each milestone accordingly.

In 1998, before Jimmy Russell’s 45th anniversary (and assumed retirement), Eddie set out to create a Bourbon fitting of his father’s legacy as “the Master Distiller’s Master Distiller.” Enter Russell’s Reserve 1998 – an exquisite small batch bourbon that honors one of the most endearing father and son distilling teams in the spirits industry. With 61 years under his belt, Jimmy is no closer to retiring but Russell’s Reserve 1998 is a tribute worthy of a man who many consider the reason America’s native spirit is having a profoundly important moment on the global stage.

Working side-by-side with his father for 35 years, Eddie decided to hold onto some of the barrels distilled in 1998 in the hopes of creating a special whiskey aged to perfection – the same year Apple introduced the iMac. This particular liquid is the most complex and mature to be released under the Russell’s Reserve namesake – having spent its lifetime maturing in the distillery’s timber rickhouses and taken out of the barrels at the peak of its maturity. The result is a magnificently matured 102.2 proof, non-chill filtered, golden amber Bourbon, with notes of dried apricots, pears and bananas and featuring hints of nutmeg and cinnamon.

“Typically, a Bourbon this old picks up a lot of flavor from the barrel and can taste quite woody and dry. We like to retain the caramel, vanilla and fruity notes in our whiskies and this particular liquid seemed to reach a sweet spot around the 15 year mark,” said Master Distiller Eddie Russell. “It was important for us to stop the aging before those less desirable flavors took over the overall profile of the Bourbon. I guess I am going to have to find another Bourbon to celebrate Jimmy’s retirement… if that ever happens.”

With only 23 barrels of Bourbon bottled – the smallest batch ever under Jimmy and Eddie’s watch, Russell’s Reserve 1998 may become one of the most coveted releases ever bestowed upon the Bourbon community. Only 2,070 bottles will be available nationwide for a suggested retail price of $250.