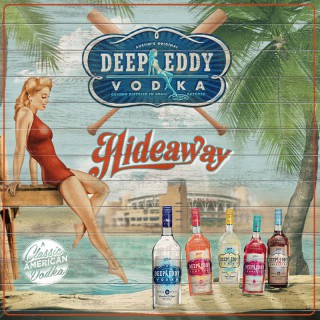 “Deep Eddy Vodka was created in Austin to celebrate classic American pleasures and nothing brings people together for classic good times like America’s pastime,” said Eric Dopkins, CEO of Deep Eddy Vodka. “San Diego’s laid-back lifestyle and thriving craft cocktail scene are a perfect fit with the Deep Eddy brand DNA. We could not be more excited to support both the city of San Diego and the Padres for an enthralling season ahead and next year at the 2016 MLB All-Star Game at Petco Park.”

“We are excited to forge this partnership with Deep Eddy Vodka and to offer the brand’s quality craft vodka and signature Deep Eddy cocktails to our fans,” said Padres Vice President/Chief Hospitality Officer Scott Marshall. “The Padres strive to create a best-in-class fan experience, and the Deep Eddy Vodka Hideaway is sure to be a premier gathering spot at Petco Park.”

Deep Eddy Vodka, a premium spirits company based in Austin, Texas, was founded in 2010 by two local entrepreneurs with a background in beverage and spirits, Clayton Christopher (creator of Sweet Leaf Tea) and Chad Auler (creator of Savvy Vodka). As a recent recipient of the 2014 Impact Hot Brand Award in the spirits category, Deep Eddy is recognized for its unique production process and incorporation of real, natural ingredients in its flavors. All Deep Eddy products are distilled in small batches at its state-of-the-artTexas distillery.  The company’s line of products include: Deep Eddy Straight Vodka, Deep Eddy Sweet Tea Vodka, Deep Eddy Ruby Red, Deep Eddy Cranberry and Deep Eddy Lemon. Deep Eddy Vodka is available in stores in all 50 states. More information on the company can be found at www.deepeddyvodka.com or www.facebook.com/deepeddyvodka.