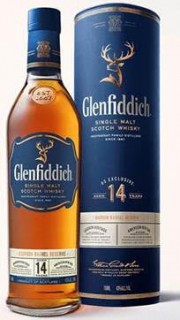 Kinsman comments: “American Oak casks have had a significant influence on single malt Scotch whisky maturation and the flavor profiles we find today.  By maturing this expression in bourbon casks we’ve created a beautifully intense flavor, reflective of the relentless passion we have for producing incredible single malts. With notes of fresh oak and velvety caramel, our 14 Year Old remains true to Glenfiddich’s heritage of producing fruity and deeply flavored whiskies and is the perfect marriage of bourbon sweetness and Scotch complexity.”

Peter Gordon, Glenfiddich Company Director added: “As a family run company we’re able to be bold and innovative with our whisky making – and the exclusive Glenfiddich 14 Year Old is a wonderful example of this. We cherish our independence as it gives us the freedom to work with people who share our values – such as The Kelvin Cooperage, which is itself a family run company – and continue to create innovative whiskies of exceptional depth, distinction and diversity of flavor.”

Glenfiddich 14 Year Old is presented in a deep navy blue casing – inspired by the color of the Kentucky state flag – and is embossed with Glenfiddich’s iconic gold stag. The packaging is a celebration of the two whisk(e)y worlds and pays homage to the American whiskey industry’s contribution to single malt Scotch whisky. Glenfiddich 14 Year Old (43% ABV) is certified Kosher and will be available nationally this fall at luxury whisky retail stores and premium bars and hotels in the United States.  (MSRP: $49.99 / 750ml)

Glenfiddich – the world’s most awarded and best-selling single malt Scotch whisky – is run by the fifth generation of the Grant-Gordon family and today is one of the few remaining family-owned and operated distillers.  From dream to dram, the Glenfiddich journey began in 1886 when founder, William Grant, realized his dream of creating the ‘best dram in the valley’ in Dufftown, Scotland.  Equipped with distilling expertise, gained after working 20 years at the Mortlach distillery, Grant purchased the necessary tools for the job and he found his premises in the beautiful nearby field of Glenfiddich, Gaelic for ‘valley of the deer’ that also included a pure water source provided by the Robbie Dhu Spring, a vital ingredient in the production of quality whisky. The Glenfiddich distillery was born on Christmas Day 1887, when spirit first flowed from the Glenfiddich stills. The combination of crystal clear water from the spring, home-grown barley, pure Highland air and the unusually small size of the stills, produced an unrivalled single malt Scotch whisky.

William Grant & Sons, Ltd. is an independent family-owned distiller headquartered in the United Kingdom and founded by William Grant in 1887. Today, the luxury spirits company is run by the fifth generation of his family and distills some of the world’s leading brands of Scotch whisky, including the world’s most awarded single malt Glenfiddich®, The Balvenie® range of handcrafted single malts and the world’s third largest blended Scotch Grant’s® along with iconic premium spirits brands Hendrick’s® Gin, Sailor Jerry® Rum, Tullamore D.E.W. Irish Whiskey and Milagro® Tequila.