FREEPORT—Maine’s premier small batch craft distiller, Maine Craft Distilling, recently launched a crowd sourcing campaign on Indiegogo to raise funds needed to open a traditional Public House in Freeport. The Public House will be located on the second floor of the historic Mallet Building (circa 1886), above the distillery’s recently opened tasting room.

According to Luke Davidson, distiller and CEO of Maine Craft Distilling, a Public House is a community-gathering place at which people can pick up a snack, have a hard or soft drink, or a beer. He plans to offer locally sourced food, craft beer and, of course, cocktails highlighting Maine Craft Distilling spirits, which are made at the distillery in East Bayside Portland. “The Public House will be an ideal setting to hold a book group meeting, join a friend and play chess, conduct a poetry slam, or to relax after work,” said Davidson. 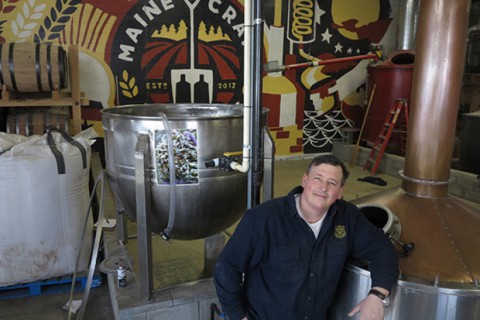 Maine Craft Distilling began selling its farm-to-flask spirits in July 2013 from its tasting room on Fox Street in Portland. With the addition of the Freeport tasting room, which opened in December 2014, and the new Public House, Davidson hopes to expand exposure to and interest in Maine Craft Distilling’s spirits among a larger audience—particularly visitors to Maine. “We’ve come a huge distance on a tight budget in the last two years,” said Davidson, “but to take this to the next step, we need the help of our supporters. Maine is a small market for a craft distiller and while we’ve expanded distribution to Massachusetts, we think there is significant untapped customer base outside of Portland and among Maine’s visitors.”