The company, co-owned by international pop superstar Nicki Minaj, is taking the next bold step in the fast-growing, single-serve, ready-to-drink wine market with three new blends that combine select premium Spanish wine with natural fruit essences and a touch of sparkling carbonation to create a refreshing anytime wine beverage. Once again, as with MYX Fusions Moscato, MYX is poised to change the way young women and men enjoy their wine. 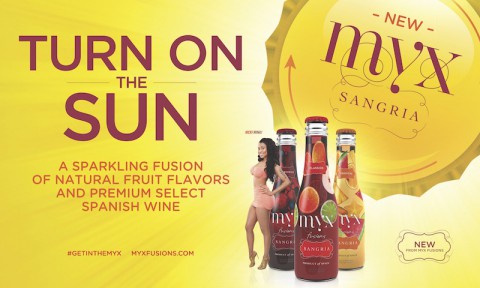 TROPICAL – A Spanish White, bringing the flavors of the tropics straight to the consumer with a combination of Passion Fruit, Mango, Coconut, Peach and a hint of Cinnamon, the special twist MYX Fusions added to this soon-to-be best seller.

REDBERRIES – A classic mix of American fruits; Strawberry, Raspberry, Cranberries and Blueberries creates an incredible taste for consumers who are looking for a new twist in a Sangria.

New POS features an eye-catching bright yellow background and showcases the chic new bottle designs.  Nicki Minaj strikes a classic pose next to the bottles.  The poster design will, indeed, Turn on the Sun in any retail establishment.  MYX Fusions will also launch a fully integrated marketing campaign that will include print, radio and broadcast as well as exclusive events and social media messaging in support of the new blends.  The winner of a 2015 Growth Brand award from the Beverage Information Group, MYX believes Sangria is on-track to become the next sensation for on-the-go young adults in the key 21-34 age group.

“The MYX Fusions team is excited by the addition of MYX Fusions Sangria.  We see this as the logical evolution of the brand and it comes at the perfect time,” says Peter Reaske, MYX Fusions CEO. “It’s great to see the displays going up in time for the height of the summer season.”

MYX Fusions Sangria joins MYX Fusions Moscato.  The Moscato flavors are available in 47 states, Australia, Canada, UK, and continues to expand.  Suggested retail price is $8.99-$9.99 187ml, 4 pack with an ALC. 5.5% By Vol.  For locations, please visit us online at www.myxfusions.com.

Get in the MYX!

Minaj also stands at the top of the pop vanguard. The double-platinum “Anaconda” set the record for most VEVO views in 24 hours. Nicki also achieved the highest digital sales for any female artist in history with over 50 million track sales between solo and feature performances. She and Adele are the only two artists in history to sell 1 million copies of five different songs in one year. She also holds the record for most Hot 100 entries on Billboard‘s Hot 100 chart.  Throughout her career, Minaj has been awarded 4 American Music Awards, 8 BET Awards, 7 BET Hip Hop Awards, 4 Billboard Music Awards, 2 MTV EMA’s,  2 MTV Video Music Awards and a People’s Choice award.  Outside of music, she has starred in films including Ice Age: Continental Drift and The Other Woman in addition to judging American Idol. An icon of her time, Nicki is truly on the road to legendary.

Formed in 2013, MYX Beverage, LLC is the parent company for MYX Fusions beverages. The company is comprised of strategic partners committed to taking the growing Moscato wine industry by storm. #GetInTheMYX

Peter Reaske / CEO- has over 30 years of experience in the marketing and distribution of beer and alcoholic beverages. He was the former Vice President for Foster’s Americas and Global Commercial Director of the Foster’s Beer Group. Prior to Fosters, Peter was with Molson Breweries USA where he served as Vice President of Allied Brands and Marketing and was responsible for increasing sales volume by almost 150% over 3 years, the successful launch of new brands and the strategic positioning of the company for its sale to Phillip Morris.

Mona Scott Young/ CMO – has over 20 years of experience in marketing and branding. She is also founder of Monami Entertainment, a multi-media company that specializes in film and television production, talent management as well as brand and product development. She is the producer of the highly successful reality series Love & Hip Hop. Mona’s business and philanthropic achievements have garnered recognition from a variety of prestigious organizations and her many accolades include Marketer of the Year by Ad Age Magazine.