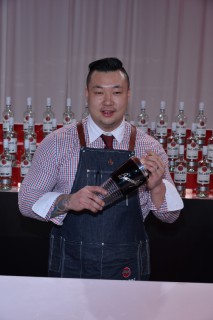 CORAL GABLES, Fla., Feb. 25, 2015 /PRNewswire-USNewswire/ –– United States Bartenders’ Guild (USBG) crowned Ran Duan of The Baldwin Bar at Sichuan Garden in Woburn, MA as the national finalist of the fifth annual USBG Legacy Cocktail Showcase sponsored by BACARDÍ rum in Miami Beach. Duan will receive an all-expense paid trip to Sydney, Australia, and the opportunity to share his unique creation on the global stage as the United States representative in the BACARDÍ Global Legacy Cocktail Competition. Duan emerged from a field of nine national semi-finalists from across the country, winning with “Father’s Advice,” his innovative BACARDÍ Gold cocktail.

The USBG Legacy Cocktail Showcase Sponsored by BACARDĺ showcases the ‘best of the best’ in the cocktail trade, providing a stage from which participants can share their innovative creations. Participants are challenged to create the next generation of classic rum cocktails using BACARDĺ Superior or BACARDĺ Gold rum; drinks that will become as revered as the BACARDÍ Daiquirí and the BACARDÍ Mojito. Classic cocktails are defined by their balance, flavour, quality of ingredients and aesthetic appeal, as well as their enduring popularity and the story behind them.

“Duan’s winning cocktail and presentation embodies the irrepressible spirit of BACARDÍ, breaking traditional boundaries of cocktail creation and demonstrating the ability to sustain the test of time,” noted Arvind Krishnan, Vice President and Brand Managing Director for the rum category at Bacardi U.S.A., Inc. “We saw highly talented bartenders and inventive cocktails created this evening, and are excited to see Duan advance to represent the United States at the Global Legacy Cocktail Competition.”

Ran Duan from the U.S. Showcase will advance to the Global Competition, and will present in front of a judging panel representing some of the most influential experts of the international bartending and spirits community. The Legacy Global Cocktail Competition continues to grow in scale and prestige, with participants from 36 countries including the United States, Dubai, Finland, Latvia andChile enlisted in 2015, more than ever before. Only one will see their drink crowned as the 2015 BACARDÍ Legacy Cocktail, to be honored alongside classics like the Original BACARDÍ Mojito, the Original BACARDÍ Daiquirí and the Original BACARDÍ Cuba Libre.

About BACARDÍ Rums
In 1862, Bacardi revolutionized the spirits industry when founder Don Facundo Bacardí Massó began producing his remarkable light-bodied, smooth rum. The unique taste of BACARDÍ inspired cocktail pioneers to invent some of the world’s most famous drink recipes including the Mojito, the Daiquirí, the Cuba Libre, the Piña Colada, and the Presidente.  BACARDÍ Superior rum has won more than 550 awards for quality and taste making it the world’s most awarded rum.  Today, BACARDÍ is produced in Puerto Rico, following the production legacy set forth by Don Facundo Bacardi Massó – crafted in a five-step distillation process, mellowed in American white oak barrels, and filtered five times for unparalleled quality and smoothness.  http://www.Bacardi.com