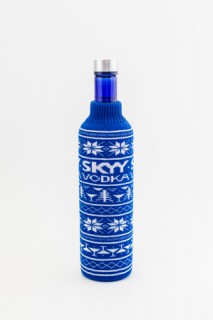 SAN FRANCISCO–(BUSINESS WIRE)–This winter, SKYY® Vodka, the American-made vodka steeped with the progressive spirit of California, is wrapping itself up in everyone’s favorite, festive fashion don’t – the ugly holiday sweater. Available for a limited time during the holiday season, iconic cobalt blue SKYY bottles will actually be wrapped in blue and white Fair Isle knit sweaters, making them the ideal whimsical gift for party hosts and a conversation piece at holiday parties nationwide.

The bottle is part of SKYY’s 360-degree marketing campaign, entitled “Let’s Holidayy,” which offers a fresh take on existing holiday traditions. SKYY will transform cities into festive, knitted wonderlands from coast to coast this December with sweater bombing spectaculars. In New York, a knitting needle armed crew, led by acclaimed artist Magda Sayeg, will create large-scale pieces inspired by the limited edition bottle live at Chelsea Market, which will remain on display for the month. The sweaterific art installations will be seen at other iconic Big Apple locations such as Union Square and the Meatpacking District as well as on a fleet of roving knit-wrapped, vintage pickup trucks.

Beyond The Big Apple, SKYY will continue its knit takeover in other major U.S. cities at ugly holiday sweater parties at on-premise accounts and at influencer events complete with ugly sweater wearables and swag. To the delight of bus riders in Boston and in downtown Chicago, bus shelters will be wrapped in cobalt blue knitted graffiti, while transit buses traversing San Francisco will be bundled up from the winter chill while promoting responsible drinking.

“The SKYY brand possesses the innovative and progressive spirit of California, where it was first created, so we’re always looking to invent new experiences like “Let’s Holidayy” for our consumers,” says Umberto Luchini, Vice President of Marketing at Campari America. “Ugly sweaters have become a big pop culture trend, with people theming entire parties around them, and vodka is the number one spirit consumed during the holidays. It was a natural fit to combine the two.”

To keep with the holiday spirit, SKYY’s global ambassador Otis Florence and DIY lifestyle experts Anne Sage of The City Sage and Ashley McLaughlin of Edible Perspective, have developed a collection of flavorful holiday cocktail recipes using SKYY Vodka, SKYY Infusions Blood Orange and SKYY Infusions Coastal Cranberry that are sure to keep the season cozy and bright!

The SKYY Holidayy Sweater Bottle is 80 proof and will be available for a limited time at liquor stores in November and December nationwide for a suggested retail price of $18.99 for 750 ml. For more information, visit http://www.facebook.com/SKYYVodka or Twitter: @SKYYVodka

SKYY Vodka was invented in San Francisco in 1992 and is steeped with the innovative and progressive spirit of California. Conceived by an inventor looking to create the world’s smoothest vodka, SKYY revolutionized vodka quality with its proprietary quadruple-distillation and triple-filtration process to deliver a fresh, clean spirit. Like many things that originate in San Francisco, SKYY grew from a tiny startup into what it is today—the leading domestic premium vodka in the US. To learn more, visit SKYY.com.

Davide Campari-Milano S.p.A., together with its affiliates (‘Gruppo Campari’), is a major player in the global beverage sector, trading in over 190 nations around the world with leading positions in Europe and the Americas. The Group was founded in 1860 and today is the sixth-largest player worldwide in the premium spirits industry. The Group’s portfolio, with over 50 brands, spans spirits, the core business, wines and soft drinks. Internationally-renowned brands include Aperol, Appleton Estate, Campari, Cinzano, SKYY andWild Turkey. Headquartered in Sesto San Giovanni, Italy, Campari owns 16 plants and 2 wineries worldwide and has its own distribution network in 19 countries. The Group employs around 4,000 people. The shares of the parent company, Davide Campari-Milano S.p.A. (Reuters CPRI.MI – Bloomberg CPR IM), are listed on the Italian Stock Exchange since 2001. For more information:http://www.camparigroup.com. Please enjoy our brands responsibly.