New York, NY April 1, 2015 — The 86 Company (“The 86 Co.”) is thrilled to announce Tim Cooper as the newest addition to its growing team of talented bar professionals. A 17-year bartending veteran, Cooper will take on the role as East Coast Portfolio Specialist where he will oversee local marketing, sales as well as bartending initiatives for the award-winning spirits portfolio. 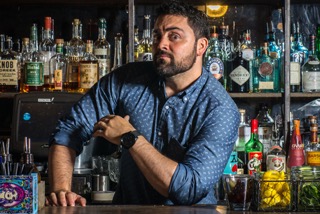 Cooper, a BAR Ready Certified Mixologist, began his career as the Event Coordinator and a Junior Partner in Contemporary Cocktails Inc., a global beverage-consulting firm based out of New York City before going off to start his own company In Good Spirits LLC. Since then, Cooper has worked at some of New York’s top bar establishments such as Gold Bar and Sweetwater Social to name a few and has coordinated and executed top-notch beverage programs at numerous events including The New York Food & Wine Festival, Tales of the Cocktail and the Manhattan Cocktail Classic.

His mixology talents have not gone unnoticed as he’s been featured on various television programs and radio shows such as VH1’s Morning Buzz, Fox & Friends and Martha Stewart Radio among others. In addition, his recipes and know-how have been included in well-known publications like The NY Times, Timeout, NY Post, Beverage Media, Complex Magazine and IMBIBE Magazine.

“We couldn’t be more excited to have Tim Cooper join our team,“ says 86 Co. Founder Simon Ford. “He is extremely well-respected in the bartending community for his calm, cool and collected demeanor, strict work ethic, “nice guy” attitude and overall – ultimate bartender persona. We are very lucky to have him join The 86 Co. and help us as make some serious noise in 2015.”Cooper is the second big hire of the year for The 86 Co., joining the new Vice President of Sales, Bryan Townsend to its growing family of outstanding professionals.

In addition to bringing on Cooper and Townsend this year, in 2014, The 86 Co. quietly brought on new additions to its team including:  Sharon Bronstein as The 86 Co.’s Marketing Director, Omar YeeFoon as the Texas Brand Ambassador, Kevin Dowell, The 86 Co.’s first envoy to the Northwest, and Martim Smith-Mattsson, who was brought on as the first New York Ambassador.The 86 Co. is thrilled to bring on Tim Cooper as the newest addition to its stellar team. This year is shaping up to be the biggest one yet for the “Noise & Spirits” award-winning portfolio, and they couldn’t be more excited to embark on the continued expansion of their business.

The 86 Co. was created for and inspired by the bartending community. It launched its four distinctive spirits: Fords Gin, Caña Brava Rum, Aylesbury Duck Vodka and Tequila Cabeza in September 2012 to make available both versatile and approachable full-bodied and flavor-forward spirits ideally suited for mixing in a wide range of drinks and applications. Each product is produced by some of the best distillers and distilleries from around the globe and comes in an ergonomic bottle designed by and for bartenders, making it the go-to portfolio for any discerning bartender or tippler. The 86 Co. brands can be found in the U.S. and abroad in your favorite bars, at select retail shops as well as online nationally in the U.S.
www.the86co.com