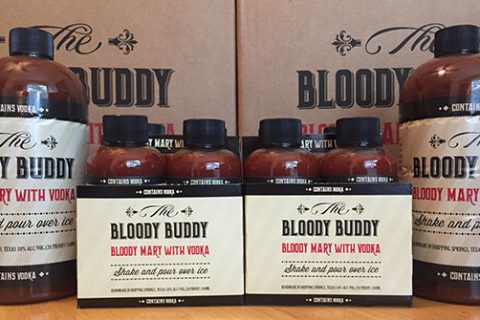 Tagged “The Elixir of Good Life”, The Bloody Buddy™ is a unique blend of handcrafted chili pepper vodka, combined with a specially formulated and spiced tomato mix, which is then bottled so that it is ready to pour and drink over ice. Its convenience is ideal for country clubs, golf courses, hotel and resort mini-bars, casinos, airlines, sports and music venues, relaxing by the pool, home entertaining, or even tail-gating because of its “no mess no fuss” style. The drink comes in two bottle sizes — a large 750 ml bottle and a 200 ml single serve [4-pack]. It’s a delicious cocktail perfect in no time, every time!

“The timing for The Bloody Buddy is right,” says founder, Buddy Jordan. “RTD’s are only a very recent phenomenon. The growth of RTD’s last year was over 15%, which is a growth rate nearly 3 times greater than the total distilled spirits segment. There couldn’t be a more perfect time for our launch with the upcoming cool weather and holidays.”

To support the launch of The Bloody Buddy, an advertising and marketing campaign will be executed across Texas. Print and radio advertisements touting The Bloody Buddy’s debut will be featured prominently in Texas, initially. In addition, Facebook users who become a fan of The Bloody Buddy can find out information about tasting events and where to find it. A launch party is also in the works with more details to follow on Facebook.

Adds the co-founder of Mix & Mary, Joey Kindred, “The Bloody Buddy is simply an amazing cocktail. During our recent Houston, Dallas, and San Antonio marketing blitzes, every account we visited thoroughly enjoyed the product! Some golf clubs wanted to order it on the spot and have it available for their members. Several luxury hotels wanted it for their guest room mini-bars. The Bloody Buddy is a very exciting project and a product that everybody wants.”

According to luxury hotel trade magazine Mr. & Mrs. Smith, hotels are maxing out on mini-bars to satisfy blue chip guests and, of course, entice them to return. “What a hotel stocks in the room can really show its personality”, said the editor of the magazine. “The thrill of a hotel mini-bar can’t be under estimated — especially one that goes beyond conventional snacks and drinks.”

“Regarding the new relationship with the creator of The Bloody Buddy,” says Mark Knake, business development for Velocity, “We think it’s a real privilege to be associated with such creative individuals who want to bring a superior product with exceptional taste to the market and there are more handcrafted RTD’s in their repertoire coming soon. We see it becoming one of the most sought after cocktails in Texas.”

Velocity is a newly formed premium spirits distribution company based in Dripping Springs, Texas. As the company grows, it will distribute other products developed by the creators of The Bloody Buddy. The company also has plans to distribute other distilled spirits and wine products and deliver to consumers quality beverages. Consumption of craft spirits continues to rise among American consumers – and Velocity is poised to meet that challenge by continually seeking new brands from all over the world. But, the initial focus of the company at this time will be the distribution of The Bloody Buddy.