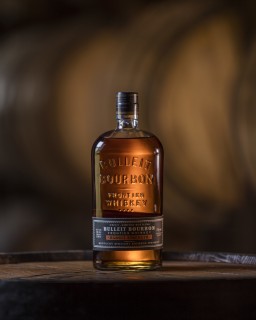 LOUISVILLE, Ky., May 5, 2016 /PRNewswire/ — Over the last year, Bulleit founder Tom Bulleit traveled the globe sharing sips of a new, unreleased style of Bulleit Bourbon with some of the world’s top bartenders. As a whiskey built by the support of the bartending community, Tom wanted to know what they would think about an addition based on higher proof instead of new flavors or finishes. The feedback was overwhelming and reinforced the decision to officially launch Bulleit Barrel Strength Frontier Whiskey in his home state of Kentucky.

Distilled in Kentucky from the highest quality ingredients, this new variant is a barrel strength version of Bulleit Bourbon with the same high-rye mash bill – roughly 2/3 corn and 1/3 rye. In April, Bulleit Barrel Strength received a Gold Medal from the 2016 San Francisco World Spirits Competition – continuing Bulleit’s history of sharing award-winning whiskeys. The barrels selected to create Bulleit Barrel Strength were emptied and combined into a single batch without the inclusion of any additional water after the whiskey was removed from the barrels. Bottled at Stitzel-Weller in Louisville, Ky., this new offering allows bartenders and fans of great whiskey the opportunity to taste Bulleit Bourbon straight out of the barrel, uncut and non-chill filtered.

“Meeting with and listening to our bartender friends who are truly Bulleit’s partners has been the smartest thing we’ve done and they’ve responded with incredible passion about our new Bulleit Barrel Strength Bourbon,” said Founder, Tom Bulleit. “This is a truly beautiful whiskey we’re sharing. I hope our fans really take the time to sip it slowly and responsibly because that’s how we’ve intended it to be enjoyed.”

Bulleit Barrel Strength is medium-amber in color, with gentle spiciness and sweet oak aromas. The mid-palate is smooth with tones of maple, oak and nutmeg. The finish is long, dry, and satiny with light toffee flavors, and deepened oak notes.

The initial release of Bulleit Barrel Strength will only be available in the state of Kentucky at licensed liquor stores and whiskey-forward restaurants and bars. It will also be available for purchase at the Bulleit Frontier Whiskey Experience at Stitzel-Weller, Bulleit’s home on The Kentucky Bourbon Trail® tour. Bulleit Barrel Strength is a limited bottling with less than 5,000 cases being made available in the initial release.

“We’re happy to share this Barrel Strength offering with our friends and loyal Bulleit fans in Kentucky,” said Ed Bello, Bulleit Brand Director for DIAGEO. “Bulleit was born in Kentucky, the state Tom and his family still call home to this day. As thousands of people head to the Bluegrass State for the best horse race in the country, we hope they’ll stop by the historic Stitzel-Weller Distillery and pick up a bottle of Bulleit Barrel Strength.”

Bulleit Barrel Strength carries a suggested retail price of $49.99 for a 750 ml bottle and $29.99 for a 375 ml bottle. The alcohol by volume varies by batch because the bourbon is bottled straight from the barrel, uncut and unfiltered, but will generally range from 120-125 proof. Bulleit Barrel Strength is packaged in the iconic Bulleit frontier-inspired bottle, adorned with a black label with orange accents.