NEW YORK–(BUSINESS WIRE)–Millennials never worked in the business world before cell phones, the Internet, and being on call 24/7. Before the millennial workforce, everyone received information through mail or fax, had pensions, and enjoyed a decent work life balance by leaving the office at 5pm. Now, Cutty Sark harkens back to that world in a new promotion at WeWork Nomad in New York City.

To introduce the brand to the next generation, throughout September Cutty Sark will have its own office in the WeWork co-working environment. Visitors will be transported back in time to the 1950s/60s, and experience what working in an old-school office was like in contrast to today’s communal office environments. In the office visitors can get old-school advice from Clem Richard, resident business consultant with decades of perspective. It’s a dose of old-school Cutty in a dot com world. 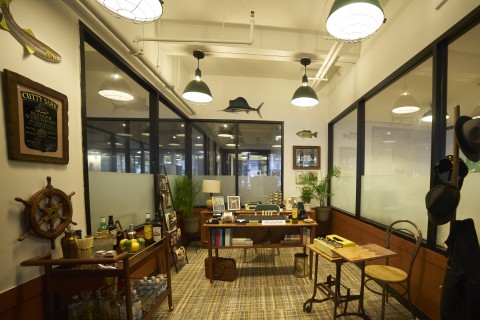 “Our Cutty Sark office and other activities inspired by the past, will provoke the next generation to think with new perspective on their work, community, and future. As our brand representative, Clem Richard will dispense more than his business acumen. He’ll offer a glimpse of the hospitality and business etiquette from another time,” says Jim Brennan, Vice President – Marketing for Edrington.

The office will be supported by social media activations to bring vitality and immediacy to the promotion. Activations include Instagrammable office features, brand videos including an Advice Series with responses to questions from WeWork members provided on Social Media, and interviews with business influencers hosted on Facebook Live.

Also included is a “repost to enter” sweepstakes asking consumers to repost images of Cutty at work using the hashtag #CuttyTalk for a chance to win a grand prize of two months of a 2 desk office space. Two second prize winners will receive two months of general desk membership. The approximate total prize value is $8800. During all stages of the month-long promotion, consumers will be encouraged to call out the brand and promotion on their social media pages. Those in today’s business world will be able to imagine back to 1960 when Cutty Sark was the number one Scotch in the U.S.

Clem Richard is a former member of the United States Air Force and has worked in numerous industries including insurance, collegiate education, and healthcare. In each position he led teams that created transformative business processes and positioned companies for the future. “Clem is a perfect representative for Cutty Sark. He will be up close and personal with WeWork Members in his one of a kind office during working hours,” says Brennan. Entering the office guests will find classic wooden furniture, period office equipment including rotary phones, upright typewriters and maybe even a mimeograph machine, as well as Cutty décor such as model ships and a bar cart. Clem, dispenser of business wisdom and lore, will welcome all visitors along with his assistants Betty and Marjorie in true 1960’s style.

WeWork members will be invited into the space to relax or use it as an extra work space, use the assistant to book the room for conferences, chat with Clem, receive Cutty giveaways, and enjoy snacks and refreshments.

“Cutty Sark has been a fixture in American bars and culture for over 90 years. Since the end of Prohibition, the Greatest Generation and Boomers have enjoyed Cutty in bars, offices, and homes and we believe the next generation of Millennials will too,” says Brennan. “While many Millennials may not yet be familiar with Cutty Sark, we believe they will identify with the brand as the original Scotch Whisky true to its vintage roots, rich in history, and not afraid to tell it how it is.”

Most Millennials would never give up their cell phones or wifi. But Cutty Sark believes they will happily engage in a quick trip back in time to the era before technology changed everything about how we work, live and think about the world.