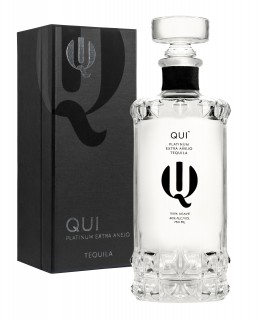 NEW YORK, May 11, 2016 /PRNewswire/ — Qui Tequila (www.quitequila.com), the world’s first platinum extra añejo tequila, is excited to announce that John Potts, the former VP of Sales and first employee at Deep Eddy Vodka will be joining the Qui Tequila team as an advisor and investor. John Potts drove the Deep Eddy sales machine from inception in 2010 to 500,000 cases in 2015, making it the fastest growing spirit brand in history.

“I have been watching the incredible momentum that the Qui Tequila team has created in my own backyard. Here in Texas they’ve become one of the top selling ultra premium tequilas in less than 18 months since introducing Qui to this market – a testament to the caliber brand and liquid the team has created.”

“I am excited to work with CEO Medhat Ibrahim who is a true NYC tastemaker and hospitality veteran. I’m also incredibly aligned with Pete Girgis, Qui’s President and cofounder’s strategy of ‘Liquid to Lips.’ The best way to scale a brand is a superior product at an accessible price. This is certainly the essence of Qui and I’m excited to help the team continue building a world class brand and business.”

Qui Tequila has doubled in volume every year since launching in 2013 despite its controlled growth strategy – focusing on deep sell-through in limited markets. Currently the brand is distributed in New York, Texas with Republic National Distribution Company and Florida with Breakthru Beverage. Qui is planning launches in two additional markets over the next 12 months, which have yet to be announced.

“We couldn’t be more delighted to welcome John to the team as an advisor. His experience in scaling Deep Eddy is nothing short of remarkable. We look forward to leveraging his expertise and relationships as we scale to a top 5 brand over the next five years,” said Medhat Ibrahim.

Pete Girgis added, “Having John on the team is going to be rocket fuel for us in ensuring we can keep the momentum that we’ve established.”

Qui Tequila was founded in 2013 by entrepreneurs Medhat Ibrahim, Mike Keriakos (cofounder of Everyday Health, Inc.) & Pete Girgis as the world’s first platinum extra añejo tequila. The team leveraged Medhat Ibrahim’s 25 years as a veteran in NYC hospitality to create a single selection – one of the highest end sipping tequilas in the market, but accessibly priced. The award-winning liquid is aged 3.5 years in French Bordeaux and Tennessee Whiskey barrels for tremendous flavor, character and a beautiful aroma. After aging, Qui is filtered and re-distilled for an incredibly smooth finish resulting in the world’s first crystal clear extra-añejo.

The Spirits of the Americas Competition awarded Qui Tequila the Gold Medal in the Extra Añejo category, and in February 2016, the Wall Street Journal named Qui Tequila “one of the five best bottles to buy now.” Men’s Journal has also called Qui “one of the best tequilas in the world.”

A favorite in the film and fashion circles, Qui was enjoyed on-screen in the Warner Brother’s Film “the Intern” and has been featured in Harper’s Bazaar, Town & Country, InStyle, Cosmopolitan, Variety, Marie Claire, and Vogue.