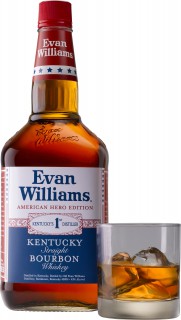 BARDSTOWN, KY – Evan Williams Bourbon is saluting American veterans with a custom red, white and blue edition of Evan Williams Black Bourbon featuring the heroic stories of 10 military veterans, chosen for their selfless acts of service at home and abroad.

As an American-made and American-owned brand, Evan Williams recognizes true American heroes through their exceptional stories of honor and bravery. Available exclusively during the month of May for Memorial Day and extending through July 4, this limited edition bottle will be sold nationwide.

The American Hero Edition bottle features custom labels showcasing the individual stories of the ten Evan Williams American-Made Heroes on one side. Adorned with stars and stripes, the red, white and blue bottle pays homage to the ultimate symbol of American independence. Evan Williams is the world’s second largest selling Bourbon in the world, and remains family-owned and operated to this day.

“Evan Williams is proud to work directly with our chosen military heroes to showcase their achievements in the military and in their communities,” said Chris Ratterman, Evan Williams Bourbon Brand Manager. “The American-Made Heroes program encompasses the spirit of Evan Williams’ American heritage and those who protect the American spirit day in and day out. Every hero has a story, and Evan Williams is honored to share them.”

Evan Williams is also extending the program by inviting others to nominate the military hero in their life to win a $250 gift of thanks and the chance to be selected as one of the next official Evan Williams American-Made Heroes – a prize that will be awarded to hundreds of military members. Nominations will showcase the difference each of the veterans are making in the lives of others while exemplifying their courageousness. To learn more about the program, go to www.American-MadeHeroes.com.

The American Hero Edition is available for a suggested retail price of $24.99 for the 1.75L and is bottled at 43% alcohol by volume (86 proof). The launch of the new custom label is supported by national advertising through ESPN the Magazine, Military.com, newspaper, and other key digital video and social media partners. Custom bottle neckers and retail displays featuring a military-grade footlocker to display the bottles will also support the launch.