Gin maker to host 44 days of events, amusements and botanically-inspired aerial transport, laddering up to the June 14th holiday

NEW YORK, NY, MAY 2, 2016 — Hendrick’s Gin, which is itself infused with cucumber, declares its takeover of National Cucumber Day, June 14th 2016, along with the entire cucumber celebration season. “All individuals prone to wonder, curiosity and atypical acts of garnishment are advised to keep an eye on us for the next 44 days,” stated Hendrick’s Gin National Ambassador, Jim Ryan. “This is not a hostile takeover, it’s more of a whimsical one. In fact, the term takeover may be overstated, since, quite frankly, no one seemed to be looking after the holiday to begin with.” 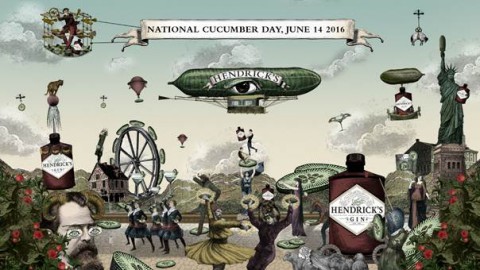 This season’s pinnacle attraction, The Cucumber Festival of Wonder, is set to take place in New York City in June. The event will present a cavalcade of cucumber-inspired marvels, including a penny farthing cycling concourse, fascinating live spectacles, roaming cocktail contraptions, and more than a few surprises.

The gin maker also announces a Most Unusual Cucumber Day Contest, whereby the cucumber curious can enter to win a trip to the Festival along with other cucumber-themed prizes, merely by capturing and posting a photograph of the Unusual on Instagram and Twitter with #CucumberDayContest and #MostUnusual.

And of course, at this very moment, the 130-foot lighter-than-air miracle known as The Flying Cucumber, which captivated the imagination of thousands during its breathtakingly slow journey last spring, has once again taken to the sky for a coast-to-coast expedition in support of the Cucumber Day season.

“Hendrick’s will commence the celebration at a grassroots level – or more accurately at a cucumber root level,” stated Ryan. To support at-home cucumber growing, complimentary Cucumber Cultivation Kits may be requested at CucumberDay.com (while supplies last).

After surveying stores across the States, Hendrick’s observed a shocking lack of Cucumber Day cards. The gin maker, conspiring with RedStamp.com, has designed its own line of customizable greeting cards that can be shared throughout the cucumber season. Design your card here.

For all cucumber inquiries, Hendrick’s Gin has established a round-the-clock Cucumber Day hotline. Ryan has promised that he himself, along with his staff of ambassadors will personally field hotline calls, “offering our expertise and making things up if necessary.” Parties interested in speaking with an ambassador are urged to call between the odd hours of 2:13pm and 3:14pm Monday through Thursdayfrom now until June 14th.

For those so wrapped up in Cucumber Day preparations that they actually forget to buy gin, worry not! Through CucumberDay.com or at Drizly.com, receive Drizly’s complimentary shipping of the most important Cucumber Day accessory: Hendrick’s Gin.

Indulge in cucumber-inspired recipes and pairings from Hendricks’s culinary colleague and fellow champion of the cucumber, Chef Harold Dieterle. Recipes will soon be available at CucumberDay.com.

“The era of people thinking of the cucumber as an innocuous salad ingredient has ended,” declared Ryan. “More than the core infusion of our liquid, the cucumber is central to our worldview as a most unusual gin.” When questioned about the risks of a gin taking on this kind of grand initiative, Ryan said, “We believed in the cucumber garnish back in the dark days when people thought it was inferior to the lime and we will always stand behind it. True, we fully expect pushback from the arugula and parsnip lobbies, but,” he added with a wink, “they don’t have an airship.”

Hendrick’s is a deliciously super premium gin, made with a number of unusual twists. To deliver a most curious and delightfully unique flavor, Hendrick’s combines a distinct blend of eleven botanicals, as well as the signature infusions of cucumber and rose petals, producing a wonderfully refreshing gin with a delightfully unique aroma. Hand crafted in Scotland in miniscule batches by William Grant & Sons, Hendrick’s is the only gin that uses a marriage of spirits from both a Carter-Head and Copper Pot Still, a combination that produces a divinely smooth gin that has both the required character and balance of subtle flavors. Since Hendrick’s was first introduced to America nearly 15 years ago, it has gained widespread acclaim and received numerous awards, including a Double Gold medal in the 2014 Fifty Best Gin Awards; ‘Gin of the Year’ at the Food and Wine Magazine Awards and voted ‘World’s Best Gin’ by the Wall Street Journal. Hendrick’s Gin has an ABV of 44% and an SRP of $34.99. Please enjoy the unusual responsibly. For further information, visit www.hendricksgin.com.

William Grant & Sons Holdings Ltd is an independent family-owned distiller headquartered in the United Kingdom and founded by William Grant in 1887. Today, the global premium spirits company is run by the fifth generation of his family and distils some of the world’s leading brands of Scotch whisky, including the world’s most awarded single malt Glenfiddich®, The Balvenie® range of handcrafted single malts and the world’s third largest blended Scotch, Grant’s®, as well as other iconic spirits brands such as Hendrick’s® Gin, Sailor Jerry®, Tullamore D.E.W.® Irish Whiskey, Monkey Shoulder® triple malt whisky and Drambuie®.

William Grant & Sons has been honored as “Distiller of the Year” by the prestigious International Wine & Spirit Competition and International Spirits Challenge ten times over the past 15 years.