NEW YORK, Oct. 25, 2016 /PRNewswire/ — Every artist, composer and master craftsman has a secret project on the side, an endeavor pursued simply for creativity’s sake. For Hennessy Master Blender Yann Fillioux, it was “Master Blender’s Selection N°1”, which in contrast to the many celebrated Cognacs he has composed throughout his distinguished career, this latest blend is a very personal signature that was only ever meant to be produced in a single, limited batch.

In French, a project like Master Blender’s Selection N°1 is called a “coup de coeur” — literally, a heart-stopper, love at first sight or, as in this case, a passion project. It began in Maison Hennessy’s reserves, one of the largest, most extraordinary reserves of eaux-de-vie in the world.

As the guardian of Hennessy’s reserves for half a century, Yann Fillioux knows every eau-de-vie stored there. Master Blender’s Selection N°1 came to life during a blending session, a moment of unbridled creativity. Innovative, robust and completely devoid of artifice, it is a truly bespoke creation. 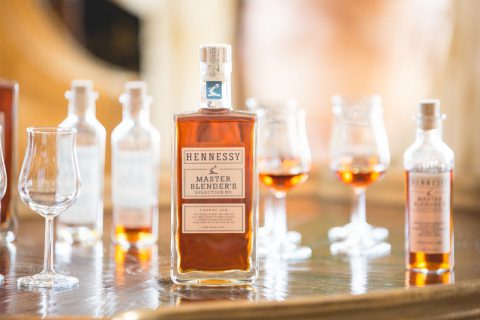 Creating Cognac requires patience and a constant dialogue between time, the elements, raw materials and skilled hands and minds. Little by little, each exchange gives rise to something precious that can only be realized through passion and a savoir-faire honed over 250 years of Cognac making.

With Master Blender’s Selection N°1, Yann Fillioux captures the essence of his art. This one-of-a-kind blend captures a particular moment in time and embodies his constant quest for excellence, extraordinary sensory memories and a perfect knowledge of Hennessy’s reserves.

Yann Fillioux and the Tasting Committee structured the Master Blender’s Selection N°1 by defining a first selection of eaux-de-vie. They then narrowed their selection down to 80 to 100 eaux-de-vie and grouped them according to their elegance, character and suppleness.  The eaux-de-vie were then aged in both young and old French oak casks. When the time was right, the Cognac was bottled at 43°C – “cask strength” – in order to release its powerful aromatic tones as well as delicate, lingering spicy notes. Crafted as a single batch, it is a limited edition Cognac with a round and rich subtlety that has a bright amber color with a golden sheen. When it embraces both nose and palate, there is an unmistakable presence of lightly grilled, unshelled almonds and candied apricots with a faintly sweet flavor. It is recommended that it be tasted neat or with three bright ice cubes.

For the introduction of Master Blender’s Selection N°1, the Maison Hennessy wished to celebrate its time-honored ties with the United States, which became its very first export market over 200 years ago. This made-to-measure blend will therefore debut exclusively in the U.S. in October 2016 and will be available in two sizes – 375ml ($45) and 750ml ($80).

Portrait of a modern Cognac

When it comes to craft, Hennessy and Hendry are kindred spirits; their works reveal a unique style and signature that can only come from many years of refining a personal creative process – and yet both embody a highly contemporary attitude.

An architect by training, Hendry is renowned for a hyper-realistic drawing technique she modestly calls “scribbling”, yet her product pen drawings and still-lifes are so finely wrought that they look like photographs.

Echoing the sentiment of Master Blender Yann Fillioux, CJ Hendry observes: “My craft is about passion and patience. It requires time, sacrifice and love. Most of all, it is a gift, and a way of life.”

The Master Blender is the guardian of Hennessy’s Cognac, ensuring that each blend’s quality is exceptionally consistent so that it stands the test of time. Nothing captures the spirit of this craft more than the new Master Blender’s Selection N°1. It is the result of the Master Blender’s freedom to create a Cognac of the moment that will not be duplicated.

Visual artist CJ Hendry is renowned for her large-scale photorealistic pen drawings. Originally from Brisbane, Australia, she briefly studied architecture at the University of Queensland until she dropped her studies to pursue her craft. Hendry managed to break into the art industry via the back door by launching her Instagram account in 2013, quickly attracting a significant following and selling her art on that platform. Since then, she’s never looked back. In 2015, she relocated to the Tribeca neighborhood of New York City.

In 2015, the Maison Hennessy celebrated 250 years of an exceptional adventure that has lasted for seven generations and spanned five continents. It began in the French region of Cognac, the seat from which the Maison has constantly passed down the best the land has to give, from one generation to the next. In particular, such longevity is thanks to those people, past and present, who have ensured Hennessy’s success both locally and around the world. Hennessy’s success and longevity are also the result of the values the Maison has upheld since its creation: unique savoir-faire, a constant quest for innovation, and an unwavering commitment to Creation, Excellence, Legacy, and Sustainable Development. Today, these qualities are the hallmark of a House – a crown jewel in the LVMH Group – that crafts the most iconic, prestigious Cognacs in the world. Hennessy is imported and distributed in the U.S. by Moët Hennessy USA. Hennessy distills, ages and blends spanning a full range: Hennessy V.S, Hennessy Black, V.S.O.P Privilège, X.O, Paradis, Paradis Impérial and Richard Hennessy. For more information and where to purchase/ engrave, please visit Hennessy.com.