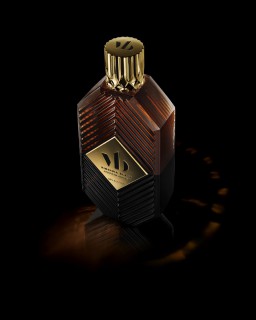 Rich. Decadent. Smooth. A personally selected collection of two, three and four-year old Bourbon Whiskey focused on a high-rye content and finished with a decadent profile. Virginia Black is mellowed to 40% alcohol-by-volume (80 Proof) to showcase the true essence of Bourbon.

Not from Virginia. The brand name evokes an attitude of glamour, swagger and soul, long absent in the American Bourbon Whiskey category.

“We believe everyone should have access to glamour, swagger and soul. Our price point grants them that access, allowing people to embody the lifestyle always, not just on special occasions.”

Beginning May 1, Virginia Black will be available in California, New York and Nevada followed by an International rollout.

Drake and Brent Hocking: A collaboration built on a shared passion for style, music, and the pursuit of taste. A quest to redefine whiskey. Virginia Black will be the first in a line of decadent expressions from their collaboration.

Brent Hocking is a passionate and award-winning spirits producer best known for creating the original DeLeòn Tequila. Among his many accolades, he is the only person in the twenty-five year history of the Robb Report to win Spirit of the Year three years in a row and additionally back-to-back Grand Champion at the World Beverage Competition in Geneva, Switzerland. With a reputable palette and unconventional “luxury with an edge” approach to branding, Hocking has deep experience in music, fashion and design, having curated the now infamous DeLeòn Rock Lounge music series at NYFW featuring stadium acts including Guns N’ Roses and Depeche Mode in intimate settings.

Aubrey “Drake” Graham is a Grammy-Award winning, platinum-selling recording artist and multi-faceted entertainer. Since first being recognized for his role on the highly-successful television series Degrassi: The Next Generation, and going on the road with rap star Lil Wayne after hearing Drake’s music in the summer of 2008, Drake has asserted himself as a trailblazer in the creative world. Drake released his mixtape So Far Gone in 2009 and his massive influence in the hip-hop and contemporary music space has commanded the market since, with no end in sight. Drake now holds the record for the most number one hits on Billboard’s R&B/Hip-Hop Chart. Drake has catapulted into stardom not only as an artist, but as a cultural maven with October’s Very Own. Sharing the story of the thriving music scene in Toronto, Drake has built out OVO from a small-scale blog about his crew to an all-encompassing lifestyle brand, including his clothing company, his record label OVOSOUND and his annual OVOFEST.