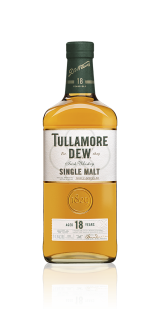 Intensely rich and smooth Irish whiskeys, both Tullamore D.E.W. single malts are characterized by their rare, four cask recipe, which sees the whiskey finished in Bourbon, Oloroso Sherry, Port and Madeira casks. Thanks to triple distillation, which is mainly unique to Irish whiskey, the malts are particularly smooth with a character quite distinct from other single malt whiskeys.

John Quinn, Tullamore D.E.W.’s longtime Global Brand Ambassador, commented: “We have a treasure chest of outstanding aged single malt at Tullamore D.E.W. While much of this gets used for our core triple-blended range, the opportunity to release a limited amount for the enjoyment of single malt enthusiasts was too exciting to pass up. The four cask finish adds a rich depth of flavor and perfect balance, while allowing the spirit’s true character to shine through.”

Created in 1829, the brand’s strong heritage started in Tullamore, a town in the heart of Ireland, and was fostered by the vision of an early founder Daniel E. Williams, whose initials live on the bottle to this day. In 2014, Tullamore D.E.W. was brought back to its roots with the opening of a new distillery in the town of Tullamore, which returned whiskey production to the town 60 years after the original distillery closed its doors.

Tullamore D.E.W. is best enjoyed to taste, but we recommend neat, on the rocks or served long with ginger beer, fresh lime juice and a dash of bitters in a Tullamore Irish Mule.

William Grant & Sons Holdings Ltd is an independent family-owned distiller headquartered in the United Kingdom and founded by William Grant in 1887. Today, the global premium spirits company is run by the fifth generation of his family and distils some of the world’s leading brands of Scotch whisky, including the world’s most awarded single malt Glenfiddich®, The Balvenie®range of handcrafted single malts and the world’s third largest blended Scotch, Grant’s®, as well as other iconic spirits brands such as Hendrick’s® Gin, Sailor Jerry® Spiced Rum, Tullamore D.E.W.® Irish Whiskey, Monkey Shoulder® Blended Malt Scotch Whisky and Drambuie® Scotch Liqueur.