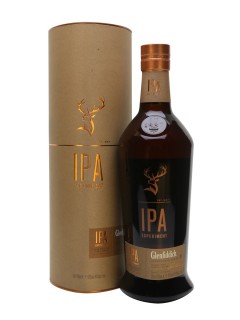 Glenfiddich Malt Master, Brian Kinsman, created the Glenfiddich India Pale Ale Cask Finish in collaboration with a local Speyside craft brewer who shares a passion for innovative flavors. The duo worked together to pioneer a new single malt Scotch whisky imbued with zesty citrus and tangy hops from the oak casks that had previously held a bold Speyside IPA custom brewed for Glenfiddich.

To pioneer a brand new malt, the collaborators first had to design and create a new IPA craft beer that would go into whisky casks, which would later be used to finish the first variant of the Glenfiddich Experimental Series. The intensive experimental process involved creating three separate brews of different strengths and levels of hops. Kinsman seasoned up to nine American oak casks at a time with the IPA brews, varying the time the beer spent imparting character into the oak casks, before filling the casks back up with whisky to assess the flavor profiles.

Glenfiddich’s Malt Master, Brian Kinsman said: “The Experimental Series builds on Glenfiddich’s long tradition of innovation and takes us to new levels of experimentation in a way no distillery has ever done before. The idea to experiment with single malt and beer was quite unusual but one we were passionate about – we wanted to really play with the flavors to see what we could create. The result is a liquid with a zesty citrus note followed by soft, sweet vanilla and a hint of fresh hops. The innovative flavor comes from carefully hand-selecting the right malt whiskies to complement the extra hoppy notes.”

Created from partnerships and collaborations with like-minded innovators from a wide range of different industries, the Glenfiddich Experimental Series unlocks new whisky possibilities in the true spirit of experimentation. The Glenfiddich India Pale Ale Cask Finish is the first in the series, which will include a number of unexpected variants over time.

Vibrant with a zesty citrus note followed by soft, sweet vanilla and a hint of fresh hops

Pour over a ball of ice, rim the glass with a small wedge of blood orange, then squeeze into the whisky for an unexpected twist.

Glenfiddich – the world’s most awarded and best-selling single malt Scotch whisky – is run by the fifth generation of the Grant-Gordon family and today is one of the few remaining family-owned and operated distillers. From dream to dram, the Glenfiddich journey began in 1886 when founder, William Grant, realized his dream of creating the ‘best dram in the valley’ in Dufftown, Scotland. Equipped with distilling expertise, gained after working 20 years at the Mortlach distillery, Grant purchased the necessary tools for the job and he found his premises in the beautiful nearby field of Glenfiddich, Gaelic for ‘valley of the deer’ that also included a pure water source provided by the Robbie Dhu Spring, a vital ingredient in the production of quality whisky. The Glenfiddich distillery was born on Christmas Day 1887, when spirit first flowed from the Glenfiddich stills. The combination of crystal clear water from the spring, home-grown barley, pure Highland air and the unusually small size of the stills, produced an unrivalled single malt Scotch whisky.

William Grant & Sons Holdings Ltd is an independent family-owned distiller headquartered in the United Kingdom and founded by William Grant in 1887. Today, the global premium spirits company is run by the fifth generation of his family and distils some of the world’s leading brands of Scotch whisky, including the world’s most awarded single malt Glenfiddich®, The Balvenie® range of handcrafted single malts and the world’s third largest blended Scotch, Grant’s®, as well as other iconic spirits brands such as Hendrick’s®Gin, Sailor Jerry® Spiced Rum, Tullamore D.E.W.® Irish Whiskey, Monkey Shoulder® Blended Malt Scotch Whisky and Drambuie® Scotch Liqueur.