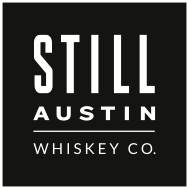 Helmed by CEO Chris Seals and distillery co-founders Sal and Joanna Salinas, Andrew and Lisa Braunberg and Cleveland and Carrol Seals, Still Austin Whiskey Co. mills, mashes, ferments, distills, barrels and bottles all of their spirits in-house at the distillery. Through their relationships with Texas farmers, Still Austin Whiskey Co. leverages the advantages of a diverse variety of local grains and the warm Central Texas climate to make whiskey. “Our commitment to a fully grain-to-glass approach symbolizes our desire to produce and deliver authentically crafted whiskeys to Austin,” said Seals.

The Still Austin Whiskey Co. team distills on a 42-foot customized bourbon still and specializes in Texas expressions of American craft whiskeys. At launch, they have introduced a portfolio of unaged New Make whiskeys including their Signature New Make Whiskey, which is distilled from white corn, red wheat and malted barley. Considered whiskey in its purest form, New Make is a term for whiskey taken straight from the still. Two other spirits are made by infusing the Signature New Make — Mother Pepper, a whiskey with chile pequin, smoked serrano and aji amarillo peppers, and Daydreamer, which highlights citrus notes from valencia, tangelo and bergamot citrus. All ingredients are sourced from Texas farmers and New Make whiskeys are neither sweetened nor artificially flavored.

Visitors to Still Austin Whiskey Co. can tour the distillery as well as taste and purchase spirits in the tasting room. The tasting room offers a cocktail program with drinks conceived by bar manager, Melody Plate. The Daisy Pepper, a cocktail made with Mother Pepper, lemon juice and brown sugar simple syrup, has a decidedly spicy kick. The refreshing Cucumber Basil Martini is composed of Signature New Make Whiskey with fresh cucumber and basil, lime juice and simple syrup. Guests can order from a full menu of libations or enjoy whiskey flights in the tasting room.

Hungry visitors can grab food from Puli-Ra, a new food trailer from chef Deepa Shridhar. Puli-Ra uniquely combines Indian spices and Texan flavors in offerings like samosa pies, roti tacos, lamb sliders and naan croissants. “Still Austin seemed like such a natural fit for us since they are dedicated to sourcing responsibly and locally,” said Shridhar. “Grain-to-glass is a concept that’s really important for us, plus it’s such a fun challenge to pair whiskeys and use their product in our cooking.” Expect to find Still Austin’s whiskey in dishes on Puli-Ra’s menu including whiskey pickles and a briskey roti taco made with smoked chai & whiskey-cured brisket.

Situated in the burgeoning Austin development, The Yard, on St. Elmo Road in South Austin, the 9,600 square-foot distillery has a decidedly communal feel. Designed by OPA Design Studio, the interior of Still Austin Whiskey Co. is at once industrial and intimate, centered around the towering 42-foot still made in Scotland by Forsyths, one of the most prestigious still makers in the world.

For those eager to be part of the Austin whiskey community, Still Austin Whiskey Co. offers several exclusive programs including a DYOB (Distill Your Own Barrel) program where groups can learn the craft of distilling whiskey directly from Still’s production team and join a community of Whiskey Geeks, an unofficial tasting panel that allows members to sample and give feedback.