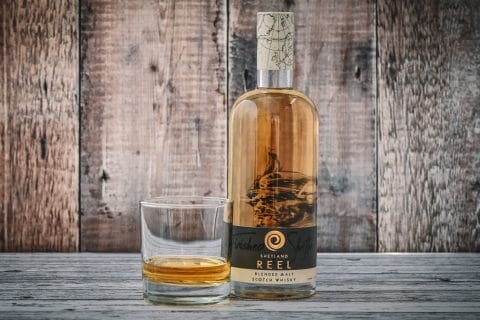 SHETLAND, U.K.— Shetland Distillery, perhaps best known for its award-winning gins is proud to launch its latest offering a Finished in Shetland Blended Malt Scotch Whisky. The UK’s most northerly distillery has been distilling a range of gin October 2014 as well as producing a series of award winning blended expressions of malt whisky. This new whisky will be the first whisky to have been partly matured on Shetland, spending 6 months of its life in sherry casks in the distillery in Unst.  It will build on the success of previous Batches, Batch 1 received a Gold Medal from the San Francisco World Spirits Competition and Batches 2 and 3 received excellent scores of 92 and 94 respectively, from Jim Murray’s Whisky Bible.

Stuart Nickerson one of the co-owners and Director, is a veteran of the Scottish whisky industry.  In his long and varied career, he has been distillery manager of Highland Park, Glenrothes, Glenfiddich, Balvenie and GIrvan, distilleries director for William Grant & Sons and brought back the Glenglassaugh distillery from mothballs after 22 years of lying silent.

The distillery Directors are focused on raising investment to install Shetland’s first malt whisky distillery, and the demand for the Shetland blended malt shows that whisky enthusiasts from around the world are waiting for this too.  Exports to date have included, South Africa, Germany, Belgium and Canada – with all 3 batches fully sold out.

Stuart Nickerson said: “Each batch of our blended malt is prepared from a small number of carefully selected casks of single malt scotch whisky to create an exceptional whisky that is inspired by our distillery location in Unst, Shetland.  It is 100% malt whisky, and with HMRC permission to ‘finish’ at the distillery for up to 6 months, we decided not only to finish it on Shetland but to do so in ex-Oloroso sherry casks to give the whisky another added layer of complexity, flavor and sweetness.”

The Finished in Shetland Blended Malt will be available to buy direct for the first time at the Shetland Arts and Crafts Fair on November 8 and online at shetlandreel.com