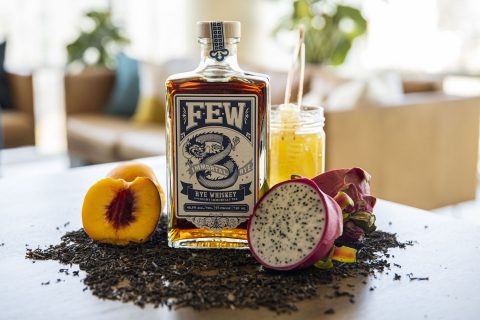 FEW Immortal Rye begins with FEW Straight Rye Whiskey, which recently won Gold “Best in Class” at Whiskies of the World 2020 and has been a consistent award winner since its introduction in 2013. FEW Immortal Rye weighs in at 46.5% ABV/93 proof. An initial 6,000 750ml bottles will be made available nationwide; SRP: $44.99. Each bottle features dragon label art inspired by priceless artwork showcased at the 1893 World’s Fair, which was held just a short journey down the Lake Michigan waterfront from where FEW Spirits headquarters stands today.

“One of the real joys of this job is the freedom to wonder, ‘what if?’ and then having the creative team in place to try to search for an answer,” says Paul Hletko FEW Spirits Founder and Distiller. He further notes, “Just as we’ve done with previous innovation favorites like FEW Cold Cut Bourbon, FEW Immortal Rye is an example of taking the space to think about things that have never been done before, whittling that list down to the ones that are actually worth trying, and then creating something that people will not only want to try, but add to their regular drinking rotation.”

Spice of the FEW Straight Rye Whiskey (70% rye, 20% corn, 10% malted barley) folds into the 8 Immortals tea to bring an overlay of peach, honey, and dragon fruit that is otherworldly. There is nothing quite like it on the market and it will appeal to drinkers who seek complexity in their whiskey and who enjoy whiskies with uncommon depth and breadth of flavor. FEW Immortal Rye contains only the highly-awarded FEW Straight Rye Whiskey and 8 Immortals tea; no sugar or additional additives are added.

Who are the 8 Immortals?

The 8 Immortals are a group of xian (translated in English to ‘immortals”) in Chinese mythology, most of which are said to have been born in the Tang or Shang Dynasty. They are said to live on a group of five islands in the Bohai Sea, which includes Mount Penglai. These historical figures represent the Taoist interest in achieving immortality. The Immortals are associated with health and prosperity, so their images are often seen at special occasions like weddings and birthdays.

This is an exquisite, hand-harvested Dancong oolong produced in small batches by an award-winning, family-run operation which specializes in making high-end Dancong oolongs. These teas are unique to the mountainous and humid southeastern corner of Guangdong Province, China. Grown at an altitude of 2000 feet, 8 Immortals has its own unique tea cultivar. After harvesting the leaves, it goes through a carefully monitored process of sun drying and repeated oxidizing, rolling and fluffing. This meticulous crafting yields a tea of abundant natural fragrance which can fill a room. It has complex floral and sweet woody notes, smooth mouthfeel, and a persistent, enchanting aftertaste.

Maria Uspenski, Founder and CEO of The Tea Spot, says, “As a long-time tea industry professional and enthusiast of craft spirits, I’m thrilled how FEW Immortal Rye combines the best of both worlds. The honeysuckle aroma of our award-winning 8 Immortals Dancong oolong melds with the malty vanilla notes of the rye whiskey base, while the woody earthy character of this unique tea lingers and resonates long past your first sip, in the best of ways. We’re thrilled to be part of this collaboration with FEW Spirits and think that beverage nerds from both camps will appreciate the synergy in this whiskey made with this legendary oolong.”

A grain-to-glass distillery since 2011, FEW Spirits produces award–winning craft whiskey and gin in a tucked away alley located in the growing Chicago suburb of Evanston, IL. A historical town where Prohibition lasted until 1972, Founder & Master Distiller Paul Hletko changed the future of Evanston when he opened FEW Spirits Distillery, the first (legal) alcohol-production facility of any kind to ever open there. Follow us online at fewspirits.com and on FB/IG/TW @fewspirits/@fewspirits/@fewspirits.