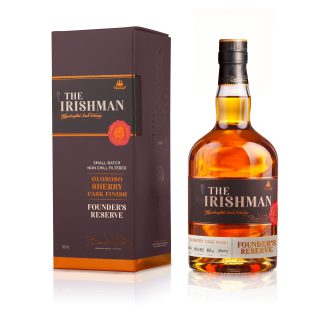 Carlow, Ireland – As noses begin to tingle with the smell of dried fruit, cinnamon and spices in markets and kitchens, Walsh Whiskey announce the timely release of an exclusive, limited-edition release of The Irishman Founder’s Reserve – Oloroso Sherry Cask Finish to ease you through the festive season.  It is the first time The Irishman Founder’s Reserve, a rare blend of Single Malt & Single Pot Still premium whiskeys, has been finished in Oloroso sherry casks. Previous limited-edition finishes have seen Florio Marsala and Chairman’s Reserve Rum cask finishes.

The Irishman Founder’s Reserve – Oloroso Sherry Cask Finish is triple-distilled entirely in copper pots and aged in American Oak Bourbon Barrels before being finished in Oloroso casks for an additional 12 months and bottled at 46% ABV. The release is limited to just 9 sherry butts, which will yield just over 8,000 bottles. The casks are being distributed to a limited number of markets including the USA, Canada, Russia, Ireland, and a select number of other key regions. The recommended retail price is $99.99 / €75.

Announcing the limited-edition release, Bernard Walsh, creator of The Irishman range of whiskeys and Managing Director of Walsh Whiskey, said: “This decadent Oloroso sherry finish to Founder’s Reserve, which is our original whiskey, combines to deliver Christmas in a bottle. It is meant to be a treat to accompany the rich baking and cooking of the festive season, and of course to either reflect on the day or to share with your nearest and dearest. I hope you will join me in savouring a tasocan (‘tash-cawn’/ dram) of this limited edition over the Winter months.”

Finished for an additional 12 months in sumptuous Oloroso Sherry butts

Hints of toasted oak and velvet spice add a sumptuous warmth to this powerfully complex expression.

Established in 1999 by husband and wife, Bernard and Rosemary Walsh, Walsh Whiskey is a leading producer of premium and super-premium, triple-distilled, craft, Irish whiskeys – Writers’ Tears and The Irishman. Demand for these critically acclaimed whiskeys currently exceeds available supply in the 50 countries they are distributed to worldwide.

Led by founder Bernard Walsh, and with a strong board of industry veterans, the company has built a portfolio of international award-winning drinks brands. These include 6 core expressions in a range of 14 premium Irish whiskeys under the Writer?’ Tears and The Irishman brands, as well as the Hot Irishman Irish coffee and The Irishman – Irish Cream liqueur.