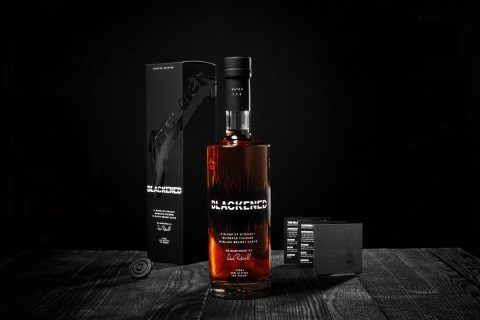 New York, N.Y. – In honor of Metallica’s iconic self-titled album, widely known as The Black Album, BLACKENED American Whiskey announces their limited edition The Black Album Whiskey Pack. A true collector’s item for both whiskey enthusiasts and Metallica fans alike, the pack features a 750ml bottle of Batch 114 finished with BLACKENED’s proprietary BLACK NOISE sonic-enhancement process tuned to the songs of The Black Album. The pack also includes a collectible whiskey coin and the Snakebyte Cocktail Booklet, featuring riffs of the classic whiskey “Snake Bite” drink created by some of today’s rock star bartenders from across the country, and named after James Hetfield’s Signature ESP Snakebyte Guitar. Now available at retailers in select markets and nationwide on BlackenedWhiskey.com.

Launched in 2018, BLACKENED was born from a collaboration between kindred spirits Metallica and the late Master Distiller Dave Pickerell. The whiskey is created from a blend of the finest, straight bourbons and ryes that have been aged for an average of 8+ years and finished in black brandy casks to the low hertz frequencies of Metallica’s music through the BLACK NOISE™ sonic-enhancement process. The low frequencies pummel the whiskey inside the barrels, causing greater interaction between the whiskey and the wood, extracting more flavors and color from the finishing barrel. In June of 2019, Master Distiller & Blender Rob Dietrich joined the fold after the passing of Pickerell, overseeing the sourcing, blending, and cask finishing of barrels for each batch.

Originally released on August 12, 1991, The Black Album is the highest selling album of any genre in the last 30 years with over 17 million copies sold in the U.S. and 35 million copies sold worldwide. The Black Album Whiskey Pack pays tribute to this celebrated album from music to cover, with the entire album featured as the finishing playlist, and the packaging and components all inspired by the album cover known the world over.

BLACKENED didn’t invent the “Snake Bite”… it’s just whiskey and lime juice, but like a classic tune, they riffed on it and made it their own. Then, they dubbed it “The Snakebyte” after James’ Signature ESP Guitar. The BLACKENED Snakebyte Cocktail Booklet features a curated collection of riffs on the classic whiskey “Snake Bite” drink. Recipes include Donny Clutterbuck’s signature serve “The BLACKENED Snakebyte,” Katie Renshaw’s “The Forked Tongue,” Damian Windsor’s “Garden of Eden,” and Michael Neff’s “Snakebyte Jello Shots.” Delicious and easy to make, these recipes are sure to have DIY cocktail enthusiasts singing to the tune of BLACKENED Whiskey!

“So many things changed for us externally after The Black Album release,” said Metallica co-founder, vocalist, and guitarist, James Hetfield. “The perception of the importance of Metallica changed greatly. Obviously with songs like ‘Sandman,’ ‘Unforgiven,’ ‘Nothing Else Matters’ becoming embraced by a lot of the world, we became a household name. It changed our lives and hopefully helped the world connect.”

The playlist features all 12 tracks from the album:

“The Black Album was one of the first albums that I truly took up as a personal anthem. It is such a bada** record and it carried me and my buddies through some intense times during our military deployments in the early ’90s and beyond,” said BLACKENED Master Distiller and Blender, Rob Dietrich. “Just like the record, The Black Album Whiskey Pack’s Batch 114 has been masterfully crafted and is heavy-hitting and well-balanced, with buttery caramel and oak on first sip, rolling through notes of apricot and almond, followed by an earthy chipotle, walnut, and maple finish. So good! Now it’s time to sip a little whiskey, throw this record on the turntable, and crank it until the windows blow out!”

The Black Album Whiskey Pack is the latest in a series of limited edition releases from BLACKENED, including Batch 106 which was sonically enhanced to a playlist from the Metallica and San Francisco Symphony: S&M2 album and won Double Gold at the 2020 John Barleycorn awards in the American Blended, Special Barrel Finish category and Double Gold in the Best Packaging Category. BLACKENED’s standard expression was also recognized with a Gold Medal at the prestigious 2020 San Francisco World Spirits Competition.

The pack is available to purchase on BlackenedWhiskey.com, Caskcartel.com, Craftshack.com, Reservebar.com, and SpiritedGifts.com as well as local retailers in select markets.

Established in 2018, Sweet Amber Distilling Co. is a producer of hand-crafted spirits. Helmed by spirits industry veteran John Bilello, Sweet Amber launched with the creation of BLACKENED – a masterful collaboration between late whiskey luminary Dave Pickerell and rock icons Metallica, which is now available in every state across the U.S. aside from Alaska. Sweet Amber is a nimble, dynamic organization that is completely virtual, allowing a greater flexibility, efficiency, and geographic coverage nationally with depth of experience in the spirits and music industries.

Rob Dietrich is the Master Distiller & Blender of BLACKENED American Whiskey, and the former Master Distiller for Stranahan’s Colorado Whiskey. Rob has more than 13 years in the industry and is well-regarded for his unique limited-release, cask finish expressions such as Snowflake, Sherry Cask, and more. Rob is responsible for every aspect of production and is committed to maintaining the original recipe, artisanal methods, and handcrafted approach to creating world-class whiskey.

Rob Dietrich initially learned the art and science of distilling from legendary distiller Jess Graber whom he proudly calls his mentor. His passion for music was honed across 10 years spent in the music business with Bill Graham Presents, as a freelance agent for a variety of venues like Colorado’s Red Rocks Amphitheatre and The Fillmore in San Francisco, as well as managing tours and festivals. He is a veteran of the U.S. Army’s 10th Mountain Division and served from 1992 to 1995. His two tours in Somalia and relief operations in Haiti helped shape his life-affirming philosophy.

Formed in 1981 by drummer Lars Ulrich and guitarist/vocalist James Hetfield, Metallica has become one of the most influential and successful rock bands in history, having sold nearly 120 million albums worldwide and generating more than 15 billion streams while playing to millions of fans on all seven continents. The band’s several multi-platinum albums include Kill ‘em All, Ride The Lightning, Master of Puppets, … And Justice for All, Metallica (commonly referred to as The Black Album), Load, Reload, St. Anger, Death Magnetic, and Hardwired…to Self-Destruct, released in November 2016 and charting at #1 in 32 countries.

Metallica’s awards and accolades include nine Grammy Awards, two American Music Awards, multiple MTV Video Music Awards, and its 2009 induction into the Rock & Roll Hall of Fame.  In June of 2018, the band was awarded one of the most prestigious musical honors in the world: Sweden’s Polar Music Prize.