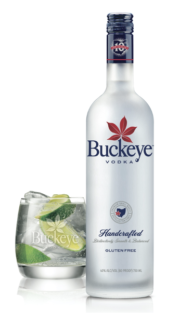 DAYTON, OH – Buckeye Vodka, the #1 Ohio-made vodka, is celebrating its 10th anniversary with a brand refresh and a new, easier to handle 1.75L bottle. To further commemorate the milestone anniversary, unique celebrations are planned to bring awareness to Buckeye Vodka’s longevity, including local community cause campaigns, a FREE online cocktail book and more. Fans can expect to see the anniversary represented at their local bars, restaurants and State liquor stores via the special, newly redesigned bottle, on shelf now, wherever Buckeye Vodka is currently sold.

“We’re proud to have reached 10 years as a company and we are more than grateful for the support we have received from the Ohio Community” says Jim Finke, Co-Founder of Buckeye Vodka.  “Our success is a testament to the passion and effort we pour into every bottle that is then shared with every bar, restaurant and liquor store that supports us as a result.”

Buckeye Vodka is a brand that is committed to making a difference by investing locally and giving back.  Currently, the brand is working in tandem with five food banks across the state to drive a sizable financial contribution to each food bank through downloads of its FREE cocktail book, found at BuckeyeVodka.com. As well, in the last two years alone, BuckeyeVodka raised and donated nearly $100,000. During the pandemic Buckeye Vodka partnered with two other Dayton-based companies, MiracleCorp and Dayton Freight, to make and donate upwards of $50,000 of hand sanitizer. The sanitizer was distributed throughout the state to hospitals, food banks, and first responders. An additional $10,000 was donated to bartenders throughout the state, as well as to the Dayton Restaurant Association in support of various initiatives.

It is also a brand that continues to lead Ohio’s alcohol and vodka market with a handcrafted production method that is meticulous and distinct. From its inception, it has boasted a true “Spirit of Ohio” – rock-solid determination in the face of adversity.