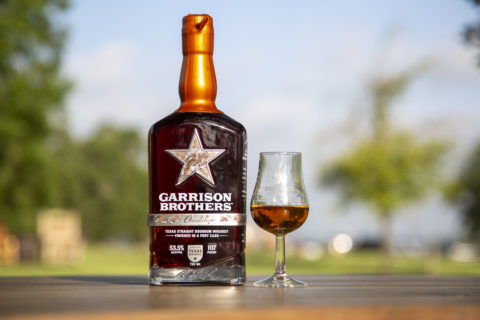 Hye, Texas — Garrison Brothers Distillery, the first legal bourbon distillery in Texas, has released a new expression to add to its portfolio. Named Guadalupe, to pay homage to one of the state’s most beautiful rivers, the Texas Straight Bourbon is bottled at 107 proof. Guadalupe is a port cask-finished bourbon that will be available year round.

Guadalupe’s release has been over six years in the making. In 2015, Garrison Brothers began an exciting collaborative project with their local winemaker friends at Llano Estacado in the Texas Panhandle. Llano Estacado is one of Texas’ oldest and most beloved winemakers. Garrison Brothers gave the winery 20 wet bourbon barrels and the winery gave the distillery 20 of their decades-old port casks. Garrison Brothers’ Master Distiller Donnis Todd aged a 4-year old bourbon in the port casks. The result: Estacado, a limited 2019 release of port cask-finished Texas straight bourbon whiskey.

At this same time, Todd then began sourcing for a more expansive port cask bourbon project. He started to connect and work directly with winemakers in Portugal to secure rich and juicy port casks directly from the source.

There are more than 80 grape varieties grown in Portugal’s Douro Valley. Many are exclusive to Portugal, which makes Port wine from Portugal unique. It’s so unique, in fact, that only Portugal-made Port can carry the identifying term “Porto” on the label. Port is a sweet wine with flavors of raspberry, blackberry, caramel, cinnamon, and chocolate sauce. Older, fine Tawny Ports have an even wider array of subtle flavors including graphite, green peppercorn, hazelnut, almond, butterscotch, and graham cracker. These flavor characteristics have great appeal to a bourbon maker.

“Over the past decade, we’ve built lasting friendships with great people across the world as we searched for the perfect port barrel. These connections are just as special to me as the bourbon we have produced,” says Donnis Todd, Garrison Brothers Master Distiller.

Garrison Brothers Guadalupe can be enjoyed anytime over ice, neat, in cocktails, and especially as an after dinner desert experience.

On July 24th, Garrison Brothers hosted a distillery drive-thru Guadalupe release event for enthusiasts to buy the first bottles of Guadalupe available. Garrison Brother’s Guadalupe will be available nationwide beginning August 2021 at retail as well as at finer restaurants and bars.

At the San Francisco World Spirits Competition in 2021, Garrison Brothers’ Laguna Madre was awarded the Double Gold Medal along with one Silver Medal for Single Barrel and three Bronze Medals. For the Denver International Spirits Competition, Garrison Brothers won Best of Show for 2021, taking 1st place for their Cowboy Bourbon.  Jim Murray’s Whisky Bible awarded “American Micro Whiskey of the Year to Balmorhea Twice-Barreled Bourbon for 2019, 2020 and 2021. Garrison Brothers was voted Best Craft Whiskey Distillery in America by readers of USA Today in 2017.