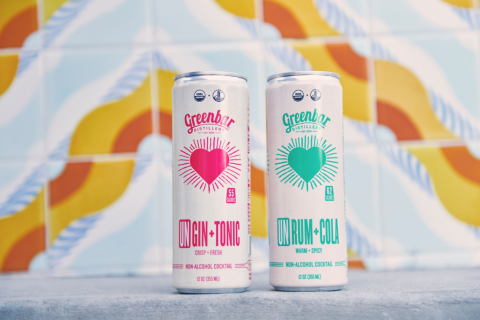 Los Angeles, Calif. — Greenbar Distillery, Los Angeles’ first distillery since Prohibition and home to the world’s largest portfolio of organic spirits, has expanded its foothold in non-alcoholic RTD canned cocktails with three new offerings that carry the hallmarks of craft distilling—real alcohol and actual distilling. The trio of non-alcoholic RTDs includes Earl Grey Bitters+Soda, UnGin+Tonic and UnRum+Cola, each of which starts as alcoholic spirits and has its alcohol stripped away during or post distillation, leaving behind the true flavors of bitters, dry gin and blackstrap rum. The new RTDs will be available in June in more than 30 states with SRPs for 12oz 4-packs of $9.99 for Earl Grey Bitters+Soda and $11.99 for UnGin+Tonic and UnRum+Cola.

“We developed these non-alcoholic drinks to meet the rising demand for cocktailing without the buzz but we wanted to do it without any compromise in flavor,” says Melkon Khosrovian, co-founder of Greenbar Distillery. “Unlike most of our competitors, we make all of our cocktails in-house using traditional fermentation, distillation and infusion techniques designed to capture the true aromas, flavors and textures of spirits.”

Greenbar Distillery, based in the Arts District of downtown Los Angeles, is the city’s first distillery since Prohibition and makes the world’s largest portfolio of craft organic spirits, including canned cocktails, vodka, gin, rum, liqueur, tequila, whiskey, amaro and bitters. Founded in 2004 by the husband-and-wife team Melkon Khosrovian and Litty Mathew, the company seeks to make better spirits for a better planet. Since 2008, the company has planted 898,614 trees and helped make more than 15 million Americans carbon negative for a day.