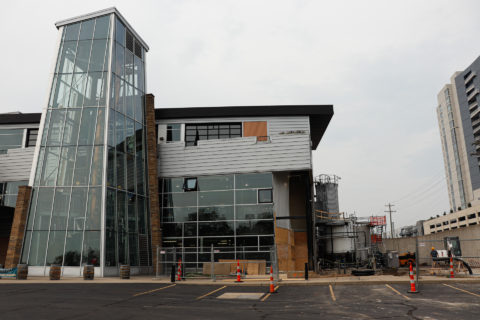 Newport, Ky. — Independently-owned New Riff Distilling is breaking ground on a $2 million-dollar expansion that will increase production by 50%, according to co-founder Ken Lewis. Construction on the 800 square foot addition has begun at the distillery’s Newport location, allowing the installation of three additional fermenters.

Lewis said the expansion will allow New Riff to producer older and more specialty whiskeys. And, the expansion necessitates hiring additional new employees with competitive salaries and benefits. New Riff is seeking diverse candidates, and those interested can apply online

“We remain committed to becoming one of the great small distilleries of the world,” Lewis said. “This expansion will help us achieve that goal while remaining a family-owned business with no outside ownership.”

Since its founding in 2014, New Riff’s products have attracted a wide following. The demand for many New Riff products outstrips demand, and Lewis said he’d like to be able to supply more fans with spirits. Currently, New Riff is available in 16 states and would like to expand distribution as well.

The project resolves a current production bottleneck and will allow for distilling to happen 24 hours a day, 4 days a week. It is estimated the change will allow the distillery to produce 12,000 barrels per year, up from 8,000 with the existing setup.

Kentucky born and urban bred, New Riff is an independently-owned distillery in Northern Kentucky — the gateway to bourbon country. In 2014, founder Ken Lewis, a visionary Kentucky liquor retailer and entrepreneur, saw a need for a new riff on an old tradition when it came to Kentucky bourbon. The Newport, Ky., distillery produces bourbon, rye and Kentucky Wild Gin. Bourbon and rye are made with traditional sour mash methods and bottled-in-bond without chill filtration. Bourbon and rye are also available in single barrel selections, and the distillery boasts a popular private barrel selection program. New Riff sources its water from an aquifer under the distillery, accessed via a 100’ deep private well and providing water with four times as much dissolved minerals than found in other water supplies. New Riff believes in transparency, so all products feature an age statement and the mashbills are public. The modern venue hosts a variety of events from Shake & Stir mixology classes to Cocktails & Conversation monthly discussions and offers an on-site bar, The Aquifer.