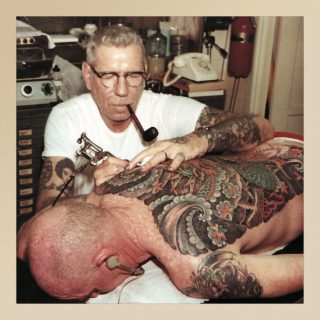 Prints of this collaborative one-of-a-kind flash sheet will serve as prizes in a number of international social media competitions across both influential tattoo-related IG accounts and through Sailor Jerry’s own channel.

In addition, three of the tattoo artists, Andrea Giulimondi, founder of London’s renowned Riverside Tattoo, Phil DeAngulo, tattooer and owner of Memorial Brooklyn Tattoo and bi-coastal tattoo artist Rosie Evans of Five Points in NYC and Marlett Tattoo in LA, will each offer one palm-sized Sailor Jerry tattoo, as well as 12 limited-edition flash sheet prints to their followers.

“Norman Collins’ work has left a lasting legacy not only on the arms of those tattooed by hum, but his iconic designs have become famous worldwide and continue to inspire and influence the tattoo culture and appreciators of his craft to this day,” says Gemma Kane, Sailor Jerry Global Brand & Cultural Ambassador. “His work was bold, inspiring and timeless and pushed the boundaries both technically and creatively — we’re honoured to work with these incredible artists to celebrate his legacy with a new generation of Sailor Jerry fans around the world.

“Sailor Jerry was not a fictional character; he was a real man that lived life and defined success on his own terms. His life’s work and philosophy inspired the brand and it’s important to us to continue to keep his legacy alive through authentic and credible collaborations — this has been a great way to do just that.”

DeAngulo, adds: “Sailor Jerry has become one of the best reference points for modern tattooers in my opinion. His ability to create designs that are simple, yet bright and bold, easily set them apart while making them very recognisable. He’s become one of the strongholds of the traditional tattoo community in modern tattooing.”

Evans, comments: “Sailor Jerry has had a profound effect on the progression of tattooing in the past 100 years. He developed a greater range of pigments, and the quality of his drawing style generally was just so much higher than his peers and that really set him apart. The proportion and style of the pin ups he drew is so fantastic and I reference them regularly. I think the inclusion of his Eastern influences as a result of his travels in the Navy are also really important as a part of his aesthetic and the blend makes something really unique.

“The design I chose to recreate, the snake charm pin up I feel perfectly embodies those two elements. It’s also one of the first larger scale designs I was asked to tattoo many, many years ago when I first started tattooing and it will always be special for that reason.

Jorgensen, explains his flash choice: “I have chosen this demon head of Sailor Jerry’s flash – it’s a piece that has always stood out for me. I just think it has such a strong impact and I love it”.

“For my painting I chose a classic lady head, this one in particular due to the simple yet intriguing pose. The design is awesome. From the rose in her hair to her glance over the shoulder, this one always catches my eye.” DeAngulo, adds.