Strike up the band. Living Essentials’ 5-Hour Energy is a billion-dollar brand.

Recent Symphony/IRI numbers show that over the past year, 5-Hour has continued to grow at a rate of more than 30 percent in supermarket, drug, mass and convenience channels –excluding Wal-Mart, where its sales are reportedly up even higher. In those non-Wal-Mart channels alone, however, 5-Hour was at $925 million.

It’s gotten to the point where other heavy hitting potential competitors, no matter how heavy they hit, have stepped aside: earlier this summer Red Bull revealed it was getting out of the shot game, just two years after it stepped in. That the company had managed to grow the second-best performing energy shot in the U.S. didn’t matter.  As Red Bull had once been to its own core category, 5-Hour is to shots.

That kind of entrenched category identification could be a reason for most other brands to pack up and go home, but for some, the long gap between number one and the rest of the field is reason enough to get in the game.

Look at the latest energy shot launch, Street King Energy Shot, which brings together the powerhouse duo of Curtis “50 Cent” Jackson and Big Red CEO Gary Smith – who, incidentally, was one of the earliest builders of the Red Bull brand itself.

There’s a certain amount of judo in the Street King idea. The Living Essentials product has slowly moved to embrace an older demographic, gradually taking on coffee instead of energy drinks through media as varied as the Golf Channel and NPR. Meanwhile, Street King, which plans to market strongly through the fan networks of stars like Jackson and boxer Floyd Mayweather, is aiming younger, according to product developer Chris Clarke.

“5-Hour energy goes for an older group,” Clarke said. ”We wanted to pull an edgier, stronger, cooler brand. Our attitude and state of mind is for people who are out there and are a bit younger.”

Smith says he has been hesitant to invest in shots in the past, he said, although his manufacturing facility had serviced brands like DPSG-owned Venom Bite. With Street King, he moved from a contractor to an investor and his sales force is pushing to get the brand into large chains.

“The proposition is that if you’re calling on retailers, then you know retailers and you can make a call on behalf of someone if it makes sense,” Smith said. “Using your reputation to sit in front of a retailer when it’s something you believe in is something you shouldn’t take lightly. And this product is something our guys believe in.” 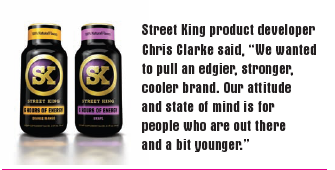 For shots, which are still a relatively new form factor, there are a lot of believers, and they aren’t just thinking about caffeine. Another beverage industry veteran, Bazi Natural Energy Shot CEO Debbie Wildrick, recently opined that although 5-Hour has “blown the category away with category growth and market share,” there is still strong potential for retailers to grow the overall shot category through addressing a variety of consumers and their need states.

“The shot category has the opportunity to meet the needs of consumers in a variety of ways,” Wildrick told Beverage Spectrum. “It’s about differentiation and it’s about understanding that we may not necessarily compare to the volume levels of the leader but that we’re offering the consumer an ‘immediate fix’ for what ails them at a retail of $2.99.”

With a high-ORAC superfruit blend, Bazi attempts to bridge the gap between the immediate effect of caffeine and the long-lead functionality of antioxidants. But that’s not the only interesting functional variant offered in the category. From the ‘anti-energy’ perspective, there has been a large migration of relaxation and sleep aid products into the shot format. With so many early relaxation drinks taking branding cues from early entries Drank and Lean, which carried a pronounced recreational vibe, the move into shots has provided an opportunity for stylistic differentiation. Products like RelaxZen, Dreamwater, and Beauty Sleep have all gone for this more medicinal approach.

Additional functionalities are appearing as well, mirroring other evolving beverage categories: protein shots, some of which even combine energy, are creeping into the market with increasing velocity. Hangover relief products like Last Round and Hangover Joe’s (both of which, ironically, made licensing deals of some sort with recent movie The Hangover) are also coming in shot formats. Probiotics, weight loss, and a panoply of other shot types are all trying to get a piece of the action.

Earlier this year, yet another veteran of the beverage business, Steaz co-founder Eric Schnell, released a multi-function shot line geared toward the natural channel called “I AM” that addresses a variety of need states, from energy to focus to emotional outlook. Ben Lewis, the founder of Give Water and an investor in Green Shoots distribution, has also taken a similar approach with the Tonic brand, offering detox, relaxation, and energy elements as part of the line.

Still, all of these variants resemble teacup poodles when compared to 5-Hour’s St. Bernard. If their different approaches work out, they category may indeed grow broadly as well as vertically, supporting Wildrick’s thesis. And don’t rule out a competitor to 5-Hour just yet. Just look at Red Bull, which used to dwarf the rest of the energy field. In case you didn’t realize, it’s got some pretty monstrous company.