The past 30 years have brought untold changes to retail at all levels. At every point in the process, from ordering to logistics to checkout, the incorporation of technology has made things faster, easier and more cost-effective.

So why are consumers still unable to find the beverage item they are looking for in the store? Despite the massive use of technology in the world of retail, the problem of out of stocks is one that remains unaddressed and as bad as ever. The generally accepted out of stock rate in the U.S. for food retail is about eight percent; this is the same as it was in 1980, or 1970.

True shopper demand is distorted, and the more popular the beverage or other product that is out of stock, the greater the resulting distortion. Operational costs go up, as store employees look for out of stock merchandise, write rain checks, 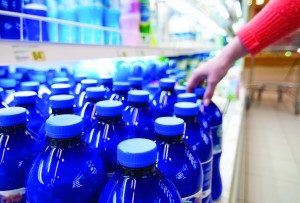 and try to appease unhappy shoppers. This translates to about $800 per store per week, or enough for an additional full-time employee.

To put that eight percent into context, it means that one out of every 13 items a shopper is looking for will be out of stock. And the curve skews to higher-demand products, meaning that the greater the sales of a given product, the more likely it is to be out of stock. The top-selling 20 percent of items comprise 80 percent of out of stocks.

The dollar losses resulting from the out of stock product itself is only the beginning. Shoppers looking for an out of stock item will only select a substitute product a fraction of the time; after two or three incidents, a shopper is likely to start shopping somewhere else.

What’s to be done then? If this problem has existed, virtually unchecked, for a generation or more, is it really unsolvable? Many old-school retailers say that there is no way to run a 100 percent in-stock condition, and they would be right. But the goal isn’t to be 100 percent in-stock on every item. The goal is to fix the top 20 percent that create 80 percent of out of stock sales losses.

Some retailers have exacerbated the problem by measuring out of stocks and making part of the store manager’s bonus calculation. This practice has lead to all sorts of novel methods for hiding out of stocks at the shelf, all of which can turn a temporary out of stock into a permanent one.

Numerous studies of the problem over the past 10 years have identified a leading contributor to the out of stock problem: poor planogram compliance. Beginning with errors in the initial shelf set, to the typical degradation of even a perfectly set planogram over time, planograms are rarely what the home office thinks they are. It’s clear that finding ways to protect the integrity of planograms is key to reducing the out of stock problem.

Another way to reduce the incidence of long-term out of stocks is through the use of sales data. The typical supermarket carries in excess of 40,000 skus, but the vast majority of sales (well over 80 percent) come from just 2,000. By monitoring the top-moving skus, and creating an alert when a popular item stops showing movement, a potential problem can be eliminated before it translates into lost shoppers.

To be sure, fixing the out of stock problem at retail won’t be easy, and it will take time and resources. But the potential payback is worth a significant investment, and those retailers that make the commitment now will reap benefits well beyond the investment.

Jeff Weidauer is vice president of marketing and strategy for Vestcom International Inc., a Little Rock, Ark.-based provider of integrated shopper marketing solutions. He can be reached at jweidauer@vestcom.com, or visit www.vestcom.com.