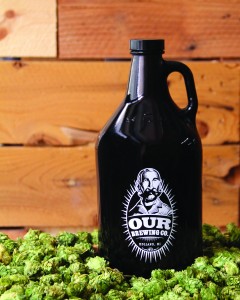 The freshness of beer, for many drinkers, serves as the variable that separates adoration from frustration. Straight from the tap brings the truest form, they say. So while cans have been all the rage, as evidenced by the continued success of Oskar Blues and the recently announced canning by Sam Adams, craft beer drinkers also treasure draft. And when they crave freshness from the comfort of their couch, rather than from a pricey trip to the bar, more and more, those consumers want growlers.

Resealable bottles or jugs typically sized at 32 or 64 oz., Growlers have lagged behind cans and bottles amidst craft beer’s surge; while the interest has long been there, they haven’t become a major takeout option for the simple reason that they remain illegal in many states. This is typically for legacy reasons: sanitation regulations that are difficult to monitor or antiquated, post-prohibition laws. However, where growlers are legal, they’re starting to catch on. Total Wine & More, a chain liquor store with an affinity for craft beer, announced in March that 20 of its stores across the country will feature growler stations by the end of 2013.

“That’s an easy decision for us,” said Edward Cooper, Total Wine’s V.P. of public affairs and community relations. “Growlers are what customers are asking for.”

Cooper said that most of the stores filling growlers will run along the coasts, however Total Wine wants to be the first to hit the market if growlers become legal in other states pushing for their availability, such as Delaware, North Carolina and Florida.

“I think what’s going to happen,” Cooper said, “is you’ll see availability of growlers ultimately being in most of the states.”

For now, the Total Wine chain, which Cooper said features more than 2,500 different types of beer, will fill growlers at The Brewery District, a store-within-a-store concept that will offer between 12 and 24 draft beers to fill one-liter and 64 oz. growlers. The Brewery District will also feature flat screen panels with information about the beers on tap and details about the breweries and the brewing process. These panels follow the widespread belief that craft, already growing, will gain an even greater market share of the overall beer category once consumers have a better understanding of the industry and its differences from domestic beers.

With Total Wine stores typically averaging 25,000 square-feet, Cooper said that there will be more than enough room for growler inventory and prominent displays. The Brewery Districts will feature several draft-only beers and could potentially serve as a point of differentiation for the stores, particularly because of the relative scarcity of the format.

“If I have a growler program and I start serving draft, that’s going to separate me from everybody else on the street corner,” said Bump Williams, a beer industry expert and the CEO of BUMP Williams Consulting Company.

When Williams thinks of growlers, he thinks of the adjoining romanticism — the glugs of every pour, the branded glass to match the beer, the fizzing head, the ability to bring a growler home, keep it in your fridge and know that it’s all yours.

“It’s not an easy thing to do,” Williams said of maintaining the growler business, “but it’s a great marketing tactic.”

While the marketing push is continuing, as Williams mentioned, there are some obstacles in place before growlers become the package of the future. Many opponents of growler legislation claim that regulating and following sanitary trade practices would present too great a challenge. As a result, several states still don’t allow filling. Also, the sheer size of growlers can make them incompatible for some retail channels, such as miniscule convenience stores. Additionally, the freshness lends itself to immediate consumption — after about two days, cans or bottles are a better choice.

As with the gradual adoption of craft beer itself, for the growlers to become a glass chorus, some more cultural changes have to take place; nevertheless, there are already a few encouraging signs. Williams said that there are already several growler bars operating and succeeding in New York City, and he knows of many retailers, aside from Total Wine, that are interested in selling growlers. When growler bills reach legislators, they commonly receive near-unanimous support, such as the one in Montgomery County, Maryland that passed the state’s House of Delegates 134-0. Brewpubs and microbreweries have long associated their operations with growlers, and according to Paul Gatza, director of the Brewers Association, 99 brewpubs and 310 microbreweries opened in 2012. As craft beer and growlers surge, so could the channels that offer them.

“They’re not just buying beer,” Williams said of the growler consumer. “They’re buying other things with it. I want that whole market basket ring in my store.”

Chad Melis, marketing director for Oskar Blues of Longmont, Colo., said he, too, believes that the growler reflects another romantic quality of craft beer, it’s all-important local feel: putting on a backpack, riding your bike to the local brewpub and supporting your neighbor with a purchase. Growlers, he said, are becoming an increasingly common part of that local support.

“As we’ve grown and gone into more states, we’ve seen this trend of growlers at retail, which is not something that we grew up with here in Colorado,” Melis said.

Yet despite the growing interest in growlers, Melis believes that they’re more suitable for occasions than for a single drinker.

“If you’re looking for a solo experience that may go over multiple days, you know, I think a 6-pack of cans is a better option,” Melis said.

Cooper has another take. He said that while growlers should be shared and that they’re often purchased for occasions, he also believes that the biggest beer fans consistently refill their growlers and enjoy the contents over a period of a few days. This serves as a trial period and a fix for their craft cravings. As Cooper and Melis travel the country and continue hearing more about growlers, they realize that the appeal of growlers packs a wide scope with significant on- and off-premise potential.

“We wouldn’t be in the growler business if our customers hadn’t demanded it,” Cooper said.