“I thought I got my protein from McDonald’s,” he said.

But he doesn’t chuckle at green juice these days. About a year and a half removed from launching Suja, Church, the CEO, has hoisted the juice company into an enviable locus, as a central figure in the high-pressure processing (HPP) movement, with approximately $20 million in revenue in the first year, according to The Wall Street Journal, and finally, the BevNET product of the year, which was announced during BevNET Live in Santa Monica.

The event took place on Dec. 9 and 10, preceded by an earlier edition of Beverage School, all at the Loew’s Santa Monica Beach Hotel.

As Church, a long-time entrepreneur in a variety of businesses, spoke on the morning of the conference’s first day, he considered Suja’s state in the context of the beverage industry. The tailwinds of swift success haven’t fogged his ability to reach pragmatism.

“As easy as it goes up, it goes right back down,” he said. 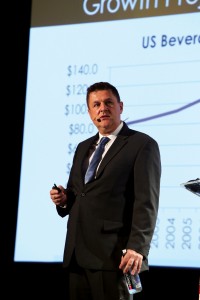 Speaking later in the day about entrepreneurs, Neil Kimberley, the founder of beverage consulting and advisory firm Foods, Fluids and Beyond, shared Church’s sentiment by reciting his take on Dickens.

“It’s the best of times and the worst of times,” he said.

Kimberley projects that as carbonated soft drinks continue to lose market share, the next five years will yield about $7 billion worth of opportunities for other cogs of the beverage industry. However, a blend of fickle consumer preferences, executive missteps or any other obstructions could quickly derail a company or a category.

The idea that a beverage company can spike or sink at any time carried over at the conference, indicating that entrepreneurs recognize the often uncontrollable factors at play. Church knows that, even now, Suja could continue to reach new levels of prominence or have about the same shelf life as the juice itself.

However, despite the cautious thinking, Kimberley’s lofty projections weren’t the only encouraging signs for beverage industry startups.

Andrew Black, the founder and CEO of BrandProject, an investment fund and brand development company, said that he’s looking for disruptive beverage ideas and willing to put $500,000 into a business. He believes that this investment, in certain cases, could jolt a startup in the first few months of funding.

“Everybody seems to know the basics of blocking and tackling to make a business successful,” he said.

However, what isn’t as widely known is a state of quality that makes a product immediately ready for the market. Sometimes it’s a lack of resources, other times it’s a shortage of good taste and ancillary opinions.

Black also looks for a company that has a maximum of four to five employees. At an early stage, when fiscal responsibility and risk-taking is of the utmost importance, you don’t want to thinly spread profits among a list of cousins and friends posting on your company’s Twitter account.

Also providing encouraging news on Monday was Terence Fox, the president of M.E. Fox Distributing. The distribution company, which records about 25 percent of its revenue from Red Bull, has a strong focus in Silicon Valley, Calif., with a high-profile list of customers including Google, Facebook, Apple, Adobe and eBay, to name a few. Black said that these companies have a quick turn rate and search for beverages that can fuel their intense workloads and match their levels of innovation.

The nearly endless streams of wealth in the Bay Area are continuing to support emerging and innovative beverage companies. Fox said that the upscale, high-end consumer is still investing in products that match the proportions of their wallets. As of Dec. 1, in hopes of seizing the important Hispanic market on the West Coast, many beer distributors have taken on Jarritos. Fox said that the combination of a healthy upscale market and the introduction of Jarritos will help drop the dominoes. He said that these distributors aren’t going to consider just one non-alcoholic beverage brand.

“If it’s a profitable brand, a distributor will get behind it,” he said.

The numbers fortify these claims. Kimberley said that in the past 12 years, the beverage industry has jumped from $78.9 billion in sales to $117.4 billion. As the sales of carbonated soft drinks continue to wane, he said that Amazon estimates a 60 percent increase in beverage sales this year. While not fully immersed in the innovative side of the beverage category, Walmart and Target are making progress. All of this, along with Kimberley’s $7 billion projection, could leave significant opportunities for ideas that establish and polish beverage trends.

Bonnie Herzog, a beverage analyst and managing director at Wells Fargo, said that cola giants often look at smaller beverage companies for ideas. Those segments that haven’t yet compromised bold decisions in favor of national availability continues to offer the next stages of the industry.

“I see a lack of innovation on their part, which I think is an opportunity here,” Herzog said.

So what has this opportunity influenced? The New Beverage Showdown, which offers startups a chance to present their product and business model to a panel of judges, indicates that whether or not these beverages will make it big, Herzog’s take is an accurate one.

The 20 presentations featured skin products, water from trees, drinks that are supposed to make you look younger and bottles with QR codes. The eventual winner, Health Ade Kombucha, was announced on the afternoon of the second day, chosen from the six finalists — vTrue Radiance, a liquid supplement for healthy skin, Happy Tree Maple Water, Health Ade, Lumi Juice, a cold-pressed, HPP juice, Chimp Food, a blend of fruits, veggies, nuts and seeds that includes the peel and pulp, and Lyft, a caffeinated stir stick.

Matthew Mitchell, a judge of the competition and the director of business development with Venturing & Emerging Brands (VEB), said that he was impressed with the professionalism, story-telling and authenticity of the finalists.

And just as Church and others in the beverage industry understand the reality of a fast fall, the participants of the New Beverage Showdown and its judges recognize the potential of avenues not trampled.

“I would encourage people to keep pushing the envelope,” Mitchell said.

Thoughout the event, retailers restated the theme: they understand the potential for emerging brands and they’re looking for partnerships. Representatives from 7-Eleven, Costco and Life Time Fitness, Inc. were on hand to discuss their interest in identifying the next wave of innovation and stocking their shelves with the buzzworthy brands of the next few years.

It’s been going on since the announcement of Kroger’s Taste of Tomorrow program in March, and the supermarket chain has steadily added up-and-coming brands — Just Chill, AquaBall, Reed’s Culture Club Kombucha and AQUAhydrate, among several others. In September, Inko’s founder and president Andrew Schamisso announced a distribution agreement with Walmart and mentioned the mass-retailer’s maturing identity, which will include more health-focused options. Target continues to assess the results of its four-wave test of emerging beverages, which includes brands such as ChiaVie, Bai, Oatworks and Karma Wellness Water. 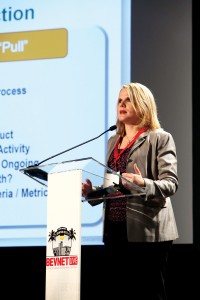 On stage, Julie Whittle, category manager for soft drinks and energy/nutritional beverages for 7-Eleven, envisioned results that could put a real dent in the beverage industry. She’s not talking trade-offs.

One new 7-Eleven store opens approximately every two hours. There are more than 50,000 7-Eleven stores in the world. The company projects that number to reach 80,000 by 2020. And Whittle and her colleagues who make the decisions for this massive network realize that consumers are eating less, but more frequently. This trend could lead to direct benefits for the beverage industry, especially for meal replacement beverages.

“We believe that beverages can very much play a role in that snacking occasion,” Whittle said.

As she searches for compatible partners, Whittle said that she’s looking for beverage brands with a regional niche and the potential to work in another market. Aside from the typical interest for quality products with a point of differentiation and packing that’s ready for the marketplace, she also wants brands that have the production capabilities and the distribution arrangements necessary for a bond of this proportion.

Whittle also mentioned that interested brands should pitch her during the spring and summer. However, if necessary, she’s willing to be flexible.

“We’re open to working with smaller companies and new concepts,” she said.

While she’s looking for more of an immediate return (six to 18 months after placement), 7-Eleven has also created 7-Ventures, a venture capitalist arm that could have the patience to cradle the right brands for three to four years.

Raja Doddala, the vice president of portfolio investment for 7-Ventures, said that the branch was founded in part because much of the beverage industry’s innovation derives from smaller brands. Doddala wants to learn about these products before the market does.

He said that he’s still unsure of the cold-pressed juice category. Whittle said that she’s interested in the next phase of energy, beyond energy drinks, such as coffee, juices and protein drinks.
Costco Calls the Shots

Costco has also entered the fray; John Eagan, the vice president and senior general merchandiser for Costco Wholesale, and Danny Stepper, the CEO and co-founder of L.A. Libations, sat down with BevNET editor-in-chief Jeffrey Klineman and explained the need for malleable brands. Costco, the second-largest mass retailer in the U.S., designs the store to do the shopping for its consumers — a unique business model that requires elasticity.

“You have to be open minded and listen to the Costco buyer,” said Stepper, who has worked with Costco for many years and played a key role in securing distribution there for ChiaVie and Aloe Gloe.

The threshold for a beverage in Costco is $1,000 per week, per store. Such quick turns result from lower pricing structures, which shrink margins but increase volume.

Stepper said that the store’s buyers will tell you what it takes to survive in their stores, from the packaging to the pricing to the delivery plans. Costco wants an acquisition value and rewards the brands that play their way.

However, despite Costco’s heavy influence in the brands that it stocks, Eagan said that he doesn’t want his store to be the only place where a certain product sells. If Costco grows to about 25 percent of a product’s revenue, he encourages other streams of distribution. If the percentage grows to 30 percent, he gets antsy.