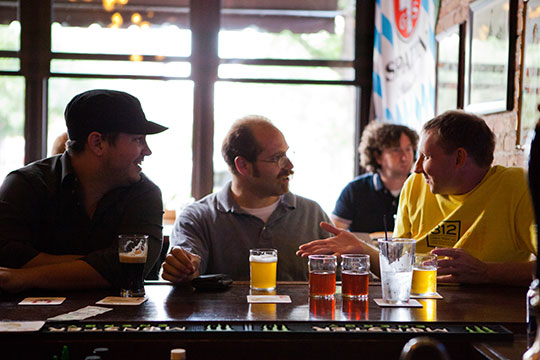 Back in the late 1980s, a locally based colleague and I made our way to Chicago’s brand-new Goose Island brewery on a late afternoon to hatch our dinner plans and see what it’s like to drink fresh-brewed beer. The offerings were such a revelation, and the pool table so continuously available, that the dinner hour came and went and we stayed until 11 PM, chatting about beer and life, having pleasurable encounters with other patrons and the bar staff, and convincing ourselves that, next rack surely, one of us was due to go on a four-ball run.  (If you’re wondering how we could have had a pool table to ourselves for six hours, well, the cue sticks were crooked and a ball was missing. And no, that run never materialized. But the cue sticks were bent!) This taproom is definitely a keeper, we concluded, and hoped this Goose Island outfit would find a way to stay in business a while.

I thought of that encounter the other day while perusing the list that Paste had released of the 40 best beer bars in America. I feel both proud and a bit sheepish to say I’ve imbibed in at least 15 of them over the past year and a half: Toronado in San Francisco, Meridien Pint in Washington, DC, Brick Store Pub in Decatur, Ga., all characterful places that are exceedingly hard to pull oneself away from, just like Goose Island 25 years ago. Of course, half the fun with these lists is feigning outrage at the criminal omission of other joints you love. No Maria’s Package Goods & Community Bar in Chicago? How could they? No Sunswick 35/35 in New York? No Whip Inn in Austin? Really, what were they thinking?

Of course, these pubs return the tavern to its role dating back to the colonies as a center of community, a place for beer lovers to “rendezbrew,” a networking platform, in today’s lingo. Not that we’ve lacked for great bars in earlier decades, but there’s something about good-quality beer that makes these places “stickier,” and not in the sense of beer spilled on the floor. In some cases the community building has been a conscious strategy, though usually it’s just a welcome byproduct of producing great beer in a great space. John Hickenlooper – now Colorado’s governor – famously opened Wynkoop Brewing as a linchpin of the revival of Denver’s nearly abandoned LoDo area (a key ally was Tattered Cover’s Joyce Meskis, bookstores being another key community-building retail species). Brick Store Pub similarly provided the spark to transform downtown Decatur from a boarded-up wasteland to a thriving, transit-centered restaurant and retail hub. On my visit there this past fall, proprietor Dave Blanchard recalled how he and his partners systematically stripped away everything they didn’t like about the restaurant business – TVs, macro beers, pitchers, frozen pints – to create a conversational enclave. In Atlanta nearly two decades ago that might have seemed a stretch, but the overwhelming response reflected an underlying thirst for this type of resort. “We became the beer place in Atlanta, only because of what we didn’t carry,” Blanchard told me. These days, besides the main space, it’s got a Belgian beer nook upstairs and a cellar, and is holding its own among proliferating alternatives because of the riches it does carry.  Guinness was about the only remotely mainstream beer I spotted there.

The truth is, for all the theory about third places and the like, these places exert a magnetic pull on patrons as centers of community, and beers associated with those places garner an outsize advantage in having their authenticity confirmed, having their latest style foray dissected and disseminated by the Twitterati, the local ones viewed by out-of-towners as somehow reflecting something intrinsic about that city’s character. These pubs and brewpubs host, and often collaborate with, local homebrewers, and otherwise extend their roots deep into the brewing culture of the area they serve.

Surely this confers a great home-field advantage for craft beers over the specialty beers being conjured up by big brewers. And these influencer bars’ aversion to stocking brands from what they view as soulless corporate entities (and these days, fairly or not, that can extend even to Boston Beer’s Sam Adams) compound the difficulty those brands have in garnering respect and buzz. Frustrated big-beer reps who’ve failed to crack these coveted accounts with Leinie’s or Blue Moon or Kona liken the effort to a bird flying up against a plate-glass window.

That’s another reason why we’re likely to see the big boys continue to acquire craft players who’ve made inroads into these accounts. Then the trick is not to fumble the acquisition. So far, even after having installed its own management team there, A-B seems to have done well by Goose Island at a time that craft enthusiasts have been watching warily for any signs of slippage: as proof, Goose has done OK holding its tap handles in these influencer accounts. (It was on similar grounds that I inveighed in this column a few years ago against A-B’s decision to stop importing Belgium’s Leffe, one of its few brands with the credibility to sustain a presence in these places. It’s since come back.)

One last thought: many bookstores have been relying on coffee shops and knickknack areas to help cover their overhead as they try to withstand the Amazon onslaught. Given craft beer’s ability to sustain community, why not dial that up in the mix? That seems to be working for stores like the bustling Kramerbooks and its attached Afterwords Café in Washington’s Dupont Circle area. If the trend takes off, not only would it defend a treasured institution but it would reinforce, beneath the beer-trivia bluster, how thoughtful and well-read we beer geeks truly are.