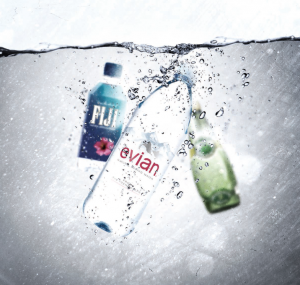 The bottled water wars are back and even the 1 percent are being sent off to battle. With the United States’ continuing shift away from soda and sugary beverages, the bottled water category is experiencing tremendous growth – so much so that it’s expected to surpass carbonated soft drinks as the number one packaged drink in the United States as early as 2016, according to Beverage Marketing Corporation. Accordingly, the landscape’s more crowded than ever before, with brands fiercely competing to capture the attention of the American consumer.

Powered by the strength of the Coca-Cola distribution system, the success of Smartwater redefined the criteria of just what made a premium bottled water “premium”. In the process of doing so it made way for a flurry of new entrants into the space. Where consumers once had an overall binary choice of municipally sourced waters vs. a handful of imported natural spring waters, the arrival of an evolving set of premium, hydration-focused enhanced waters like Essentia and Aquahydrate has blurred the lines, and has bottled water’s longtime premium legacy brands – Evian, Fiji, and Perrier, among others – faced with the challenge of keeping up with the times.

Evian’s share has gone from about 1.5 percent of the category to 1 percent (small share percentages, to be sure, but this is the high end, after all). Fiji has managed to maintain its share from five years ago – but that’s compared to 2010 – right after the nadir of the category, as concerns about resource-intensive plastic bottles and an ongoing price war between Pepsi, Coke and Nestle Waters North America slowed the overall category progress. Meanwhile, Perrier has lost ground in the sparkling water subset in terms of share, but it remains the leading premium alternative to fast-growing seltzers and Sparkling Ice. 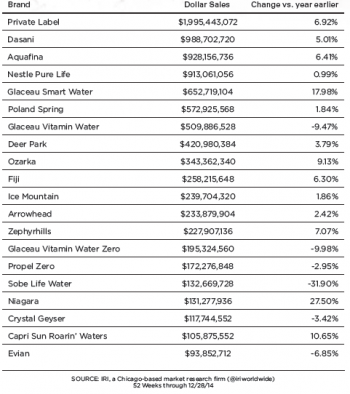 Bill Sipper, Managing Partner at Cascadia brands, a beverage consulting firm, notes some of the inherent difficulties for the category’s veteran players in regards to maintaining their relevance amidst the rise of new and innovative brands boasting added electrolytes, alkaline properties and ‘super hydration’.

“These are companies that have always been all about their pristine sources,” says Sipper. “So of course it’s a challenge to stay relevant when the definition of what they are is so tight.”

In Evian’s case, its identity is rooted in the French Alps, which takes its water on a 15-year filtration journey through mineral-rich glacial sands prior to its bottling. For Fiji, it’s an artesian aquifer that sits below its bottling facility on the remote Pacific Fijian island of Vitu Levu. Perrier’s naturally carbonated sparkling water is bottled in the South of France near the small village of Vergeze.

Because the general nature of water places limits on the extent of innovation possible to begin with, the recent marketing surrounding these brands has placed a major emphasis on their packaging. It’s here where the category’s veteran players have looked to highlight their unique points of differentiation.

In 2013 Evian underwent a bottle redesign for the first time in 14 years as part of a greater effort to reestablish its top positioning in the category and form a new connection with American consumers. Olga Osminkina-Jones, Evian’s Vice President of Marketing, says winning over the 18-34 year old Millenial is a critical component of that effort.

“We’re confident that making our target aware of what made Evian an icon – its second-to-none quality and rich history – through the new, award winning bottle design and storytelling, as well as bringing consumer added value in the way we engage with them will keep Evian’s relevance high,” she says.

Fiji underwent a facelift of its own at the top of this year, zooming in on the brand’s signature pink hibiscus in what is the company’s first label redesign in over ten years. Clarence Chia, Fiji’s Vice President of Marketing, called the revamp “the first step for us in educating our consumers through our refreshed brand strategy,” the subsequent steps of which will be a $30 million integrated marketing campaign that includes national TV spots, social media efforts, increased online presence, and promotional events.

Nestle-owned Perrier’s been arguably the most daring of the group, updating itself across several verticals. The company’s 2011 introduction of a 250 mL slim can has been a huge success in North America, as has their production of limited-edition bottles and cans created in partnership with designers and well-known artists. In 2013 Perrier celebrated its 150th birthday with a limited run of bottles featuring the art of Andy Warhol, and a year later the company debuted a collection in collaboration with three internationally known street artists.

Perrier’s also innovated through the addition of new flavors into its portfolio, and in February the company launched ‘District Perrier’, an online digital content destination that features games to redeem rewards, in an effort to drive in-store engagement.

“Introducing younger consumers to the brand is a key opportunity for Perrier, so a natural approach is through engaging digital activations as well as introducing new flavors that are popular among young consumers,” says Priya Shenoy, Group Marketing Manager of French Brands for Nestle Waters North America.

Voss, currently the fastest growing premium bottled water brand in the United States, has drawn on the previous successes of its premium water forefathers. Like Evian before it, Voss has gotten itself into the hands of celebrities and trendsetters, framing itself as the new creme de la creme water brand synonymous with luxury. As Fiji did with its then-revolutionary square bottle, Voss’ novel cylindrical glass bottle broke the mold for bottled water packaging. It’s placed major emphasis on placement in the hotel and restaurant industry and has also inserted itself into the bubbly segment, making it the only super premium brand in the United States available in both still and sparkling varieties.

Another element of keeping up with the times has been an increased focus from brands on becoming eco-friendly. Continued efforts have been made by environmental activists to portray bottled water as the face of environmental waste, and while the scrutiny and pressure has impacted the industry on the whole, it’s hit imported premium brands particularly hard. Across the category, brands have responded with increased initiatives to be mindful of their carbon footprint, reducing the amount of plastic in their bottles, ensuring that their bottles are 100 percent recyclable and prominently displaying their involvement in charitable activities and sustainability programs.

As the exclusive importer and distributor of Volvic, Brands Within Reach (BWR), a U.S. based sales and marketing firm is tasked with the job of increasing the North American presence of the Danone-owned brand, which, despite being a massive player globally with nearly $1.5 billion in annual sales, has limited exposure in the United States premium water marketplace. Volvic’s followed suit with the current trends of the industry, recently updating its bottle to accentuate the brand’s volcanic origins and reducing its usage of PET by over 30% over the last ten years.

Still, BWR’s CEO Olivier Sonnois says it’s what’s inside the bottle that will ultimately prevail in pushing Volvic into the future.

“We really believe the consumer is becoming more educated of the differences of waters and will be more discerning moving forward,” Sonnois says. “We’re seeing more of a selection criteria based on the water that’s in the bottle, which is why we’re using our new packaging to talk about what Volvic has naturally occurring in its water – magnesium, silica, electrolytes.”

There will be no resting on their laurels anytime soon. Premium water’s elite will need to to be on top of their game in order to sustain growth in what is an increasingly competitive category that isn’t going to slow down anytime soon.