By its own admission, Owl’s Brew was founded by “tea-drinking boozers,” a portrayal that might lead one to envision a couple of pasty Englishmen with a penchant for pubs and whiskey-spiked Darjeeling.

Yet you meet Jennie Ripps and Maria Littlefield, the young, vivacious ladies behind the line of tea-based cocktail mixers, and it’s clear that the image is quite off-base. Cosmopolitan and chic, effervescent and cool, the entrepreneurs personify a kind of stylish scene of New York nightlife, one that, as with other cities, has of late embraced an unrelenting thirst for unique cocktails.

Like many, however, their passion for dynamic drinks was thwarted once the bar doors closed. 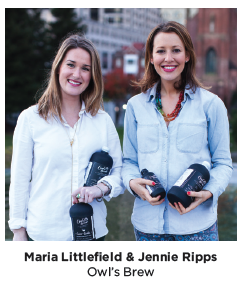 Indeed, despite the burgeoning interest in small-batch and artisanal spirits and exciting cocktail menus, at home, consumers often remain amateur mixologists, at the mercy of a clunkier-than-expected process of blending alcohol, juices, bitters and ice into bar-quality drinks.

Certainly, the promise of cocktail mixers, promoting a simpler at-home process (“Just add your favorite liquor!”), has been around for some time. Yet for Americans exposed to an increasingly vast range of flavors, as well as healthier eating habits, legacy brands like Mr. & Ms. T’s – whose products are formulated with high fructose corn syrup, preservatives and artificial ingredients – just aren’t cutting it.

“If you look at the category, it was a race to the bottom up until five or six years ago,” said Mark Mahoney, co-founder of fast-growing mixer brand Powell & Mahoney. “Everybody was just interested in price and getting on the shelf, and then the turns weren’t happening… there was no sell-through for the store. Then, people came along and started offering a much better crafted product in much smaller quantities, and [the category] started getting interesting.”

Indeed, it’s interesting, and it’s growing. Over a 52-week period ending last August 10, retail data provider  SPINS tracked 268 new spirit and mixer products in its database of natural and specialty stores and products out of a total of 1,265 – meaning that new products make up about 21 percent of the category.

That isn’t to say that interest hasn’t been around for a while. Take Stirrings, for example, which launched ahead of curve, in 1997, offering mixers made with premium ingredients, such as fresh juice and cane sugar, to create classic cocktails. The brand caught the attention of liquor giant Diageo, which made a minority investment in Stirrings in 2007, and bought the entire company two years later, noting the growing importance of at-home entertaining during the ongoing recession that had struck the U.S.

In the six years since the Stirrings deal, and with the country now operating within a post-recession economy, a confluence of health and wellness trends and sustained demand for premium alcoholic beverages has ushered in a wave of new higher-end mixer brands. That’s something that’s increasingly apparent in the form of a dynamic and growing set in natural and specialty retail channels. .

Some, such as Powell & Mahoney, have emerged as anchor brands for the expanding shelf set. Making its market debut in 2010, the company sells a line of glass-bottled, shelf-stable mixers, each made with all-natural ingredients and produced in “small craft-batched” kettles, according to the company.  Packaged with vintage-themed labels, and offering a riff on traditional mixer flavors, including its Sriracha Bloody Mary and Mango Passion Fruit Margarita, the brand is represented in a broad variety of retailers, ranging from independent liquor stores and grocers to big-box giants, including Target and Walmart.

Mahoney estimates that the brand is sold in over 3,500 retail locations, where the mixers share space with a steadily increasing number of regional upstarts and specialty blends and designed-for-cocktail sodas. The line between high-end mixer and soda brand has long been walked by brands like Q Drinks, Dry Soda and Joia (whose recipes were designed by a mixologist), all of which have made their mark both on- and off-premise. Both Grown-Up Soda (GuS) and Maine Root have strong ties to the mixer world, while import brands Fever Tree and Fentiman’s started out in the mixer set as well.

Presented in apothecary-style bottles, Owl’s Brew has turned heads with a jet-black package and label, yet gained highest praise for its low-sugar and –calorie formulations and versatility for blending with a range of alcoholic beverages, including beer and wine. Sharing the spotlight are media darlings White Whale and Bittermilk, which like Owl’s Brew, promote exotic formulations and ingredients – such as elderflowers and hops – previously unseen in bottled cocktail mixers.

The growing set of innovative mixers is also benefiting from and contributing to emerging non-alcoholic beverage trends, including those on the bleeding edge, as is the case with Pok Pok Som, a drinking vinegar that is marketed as much for its functional health benefits as it is for use in blending, or Jin+Ja, which has a very edgy, spice-forward ginger profile.

“We play it both ways,” said Dylan Myers, Operations Manager at Naam Som LLC, which produces Pok Pok Som Drinking Vinegar. “But it seems like I get a better response out of people once I say the product makes a really good cocktail; it kind of piques their interest more.”

In the produce aisle, RIPE Bar Juice is another brand that has embraced emerging trends in ready-to-drink beverages, specifically, that of cold-pressed juicing and high pressure processing (HPP). Frustrated with lack of better-tasting and healthier mixers, Michel Boissy, who co-founded the brand with childhood friend Ryan Guimond in 2008, created RIPE to be a premium alternative to powder-based products and blends made with juice concentrates. 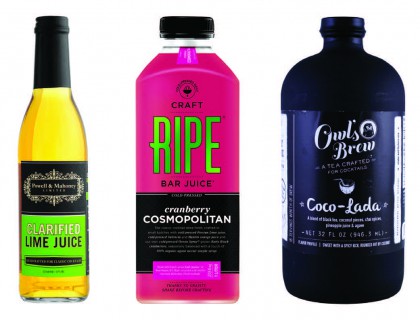 Packaged in custom-molded, square-edged 1L plastic bottles, RIPE mixers, like all HPP beverages, require refrigeration, and are distributed in hundreds for natural and conventional grocery accounts in the Northeast, North Atlantic, Florida and California. The line comes in seven flavors – Agave Margarita Bar Juice and San Marzano Bloody Mary Bar Juice are the brand’s most popular varieties – and are most often presented in produce, where the products retail for $9.99-$11.99.

While that price point is markedly higher than those of its shelf-stable counterparts, RIPE has  benefited from consumers attuned to a culture of premiumization in food and beverage, with individuals showing a greater willingness to spend more for what they perceive to be as better quality. According to Boissy, the development and positioning of RIPE draws heavy inspiration from craft beer, a category that despite higher prices than domestic and import offerings continues to benefit from surging awareness and demand.

For Boissy, the descriptor “craft” is so compelling that FreshBev last year registered “craft bar juice,” for labeling and marketing RIPE. At the time, Boissy noted that “when I think of craft beer, I think smaller batches, smaller factories, regional people, better ingredients, tons of innovation with regard to blends and 100 percent traceability. And that’s exactly what we’re all about.”

Establishing that level of quality from a visual perspective, these newcomer brands are most often presented as artisanal and founded with local stock (“Handcrafted in Vermont” is a prominent call-out on Powell & Mahoney’s front label). While package design has undoubtedly sold a few bottles for these brands, it’s an all-natural formulation that is perhaps the most critical point of difference from what was available in years past and, according to Ripps, also justifies a higher price point.

“One of the differentiators is not just being premium aesthetically, but also using all-natural ingredients, whole ingredients,” Ripps said. “People [are] still to be educated about what the product is and why they’re spending more money, but the consciousness about health and wellness has led to [an acceptance] for a more expensive mixer.”

Despite all signs pointing to continued growth in sales and the size of the premium mixer category, Ripps cautions that most consumers are still unaware of what’s available. Heeding to the age-old proverb of “it takes a village,” Ripps noted that she’s less concerned about growing competition as she is about working with others toward the development of a thriving shelf for mixers in the store.

“Right now, we need allies out there,” Ripps said. “Even though it feels like a lot of different mixers have sprung up recently, I think the set is still really small. I’m happy when I see next to three or four great mixers because it means people are going there to check out the category.”