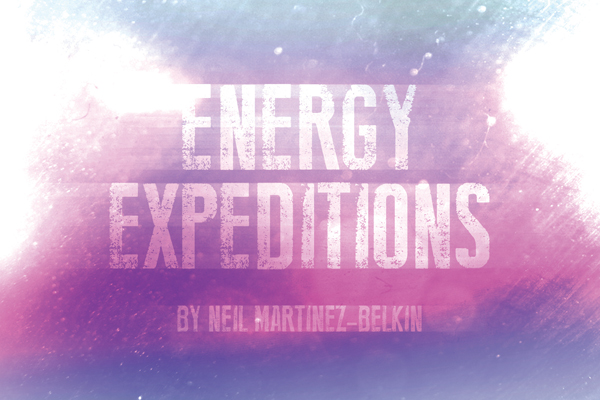 In a time where carbonated soft drinks seem increasingly passé and Americans are more conscious of what they’re putting into their bodies than ever before, consumers have proven themselves to be pretty comfortable with caffeine. That, among other things, explains why the energy drink business is booming, somehow impervious to the same pitfalls that have made way for the decline in consumption in soda.

According to multi-outlet sales data from Chicago-based market research firm IRI, energy drink dollar sales were up by 11.76 percent in the 52-week period ending February 21, 2016. That level of double-digit annual growth is projected to continue through 2019, bringing the category to just shy of $15 billion in sales.

The reason for the lack of any sort of slowdown may be that, while they represent an evolution of the soda; energy drinks are regarded by their manufacturers as something that fits all too well with their era: they are a functional platform, and that function, energy, is all too courant.

All categories mature; those that are platform-based, however, also start to find the borders of that platform, those grey areas where it might be able to explore and claim, or else slip off the edge. A look at the energy category shows the products at its center, and the edges, where expeditious line extensions lie.

The advantage lent by Red Bull’s premium pricing strategy has kept it the category leader even when its growth rates are slower than the competition. The company did $4.4 billion in sales in the aforementioned 52-week period. But Monster Beverage, which has been making major moves across several fronts, is in hot pursuit of that crown.

Nearly two years since the announcement of the Coca-Cola Company’s purchase of a 16.7 percent stake in the company, transitional issues related to Monster’s move to Coke’s distribution system appear to be in the rearview. Analysts like Wells Fargo Securities’ Bonnie Herzog have remained bullish on the brand throughout, convinced such growing pains would eventually translate into a growth spurt.

Herzog recently projected Monster to outperform the energy category through 2016 with double-digit sales growth. Beyond the U.S., Herzog has said Monster’s alliance with Coca-Cola could see the company double its existing 10 percent share of the global energy drink market within the next 5-8 years. Another power play from Monster came in February, when the company announced its plan to acquire its longtime flavor supplier American Fruits & Flavors in a deal worth $690 million.

Monster, along with third place brand Rockstar, is also seeing strong results outside its flagship brands, indicating that consumers want more than just the functionality of energy, but for it to be flavored to their particular preferences. Monster’s esoteric line extensions in coffee (Monster Java), tea (Monster Rehab) and protein (Muscle Monster) account for a sizable stake of the company’s sales, as do Rockstar’s 20 SKUs, which venture even further outside of its base into energizing horchatas and ginger brews. Red Bull, meanwhile, still relies on its core brand much more than the competition, although the company’s flavored and zero-calorie “Editions” line have been solid performers.

Zero-calorie and low sugar energy brands like Celsius and XYIENCE continue to target the caffeine-craving consumer beyond the category’s conventional 18-34 year old males. There was a time when that meant going after women, almost exclusively, but as consumers from all walks of life have begun seeking better-for-you beverage options, that’s started to shift. Global market research firm Mintel reports sales of zero-calorie energy drinks in c-stores have grown from a seven percent share in 2012 to 16 percent in 2016.

“That’s the demand being pushed up from the consumer level,” David says. “To see that happening at the convenience store level says a lot.”

Following its 2014 sale to Texas-based independent soda company Big Red Ltd., XYIENCE, a brand previously best known for its ties to the Ultimate Fighting Championship (UFC) underwent a brand overhaul, shifting the focus of its marketing from the cagefighting promotion to NCAA college football and basketball and targeting “older millennials,” a population seeking the functional benefits of energy drinks but more conscious of things like sugar content and calorie counts.

Thomas Oh, senior vice president of marketing at Big Red, points to the older millennial as one of white space with untapped potential. And in addition to the contents of conventional energy drinks not resonating with them, Oh says the marketing and imagery of these brands no longer speaks to the aging demographic as well.

“Energy as a function is so broad and extends beyond the nightclub scene and extreme sports,” said Oh. “We wanted to speak to all of the people who needed a 2 p.m. pick-me-up.”

The independent leading brands of the energy drink movement are not content with having dug into their billion-dollar brand castles. They seek new worlds to conquer. A broad view of the platform finds many brands trying to stretch their territory.

These are the spaces that will determine the power of energy: can the leading brands build outposts in other functional realms, where yogis, academics, and Googlers run wild? Already deeply rooted in bodybuilder culture, the best example of the products expanding their borders are in protein, where the caffeine is the mortar and protein the brick, and in coffee blends, where the function is the same and the power of the brand is propulsive.

It’s this trick, moving brands into other functional realms, where Monster and Rockstar have left Red Bull behind to some extent, going for a wider set of innovations over price. But it’s also where the natives of the realms have gotten restless, pumping themselves up on caffeine and taking the fight to the invaders.

Looking at the beverage world writ large, then, here are the functional areas where the key skirmishes are taking place, and, knowing that these battles are still in their early stages, at least a little bit of a scorecard. 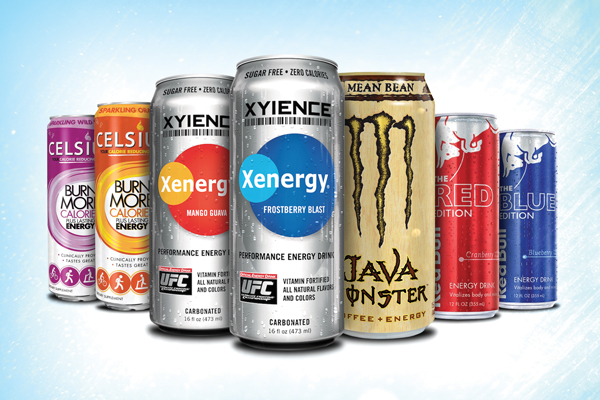 The consumer demand for caffeine has beverage brands from outside categories entering the energy segment. In 2015, bottled water brand Hint introduced ‘Hint Kick’, a 3-SKU line of flavored waters with 60 mg of caffeine from coffee bean extract. Company founder Kara Goldin said the line extension came not out of a calculated pursuit to enter the category but rather from feedback from her existing brand’s constituency, who were requesting a Hint product with a pick-me-up effect.

It’s a play from an established enhanced water brand that came several years after a Rockstar push into the segment, one that was quickly scuttled. Times change, however, and caffeinated water brands like Avitae are on the rebound along with the Hint push. That means the energy drink companies could be gearing up for another run: According to Wells Fargo Securities analyst Bonnie Herzog, an enhanced water could also be on the way from Monster later this year.

While juice blends from Rockstar and Monster have been part of the portfolio for a long time – and Mountain Dew Kickstart has been a huge hit – they haven’t yet tried to make an advance in the natural beverage set beyond the launch of Rockstar Organic. There’s a strong contingent of energy drinks that have incubated in natural and specialty channels, some of which are pushing into conventional: Runa, Guru, Hiball, Guayaki, Sambazon, Inko’s and Steaz all play in natural energy in one form or another, and the base ingredients of yerba mate, tea, and guayusa have all done some migration into other parts of the natural beverage set.

Guayusa has stretched as far as HPP juices and even into chia drinks: Garden of Flavor, makers of probiotic-infused, high pressure processed (HPP) juices have launched their own line of organic, cold-pressed energy drinks containing 100 mg of caffeine from the Ecuadorian power source, while Purity Organic and even Mamma Chia are also using it for stimulation. 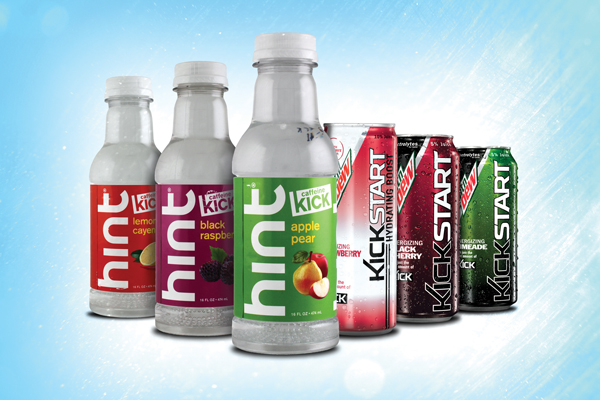 Both Monster and Rockstar have long played in hydration, but have couched it more in terms of “recovery” and “rehab” to correlate with their hard-partying image rather than any kind of sports hydration. A more sports-focused drink, Rockstar Xdurance, has also come and gone, but the big brands are still trying: Kickstart recently added two coconut water-infused flavors to the line, billing the hybrid as a “hydrating boost.”

Meanwhile, the largest coconut water companies have opted for coffee blends for their boosts rather than going for the straight caffeine and B-vitamins that are at the heart of the energy drink engine. Rockstar played in coconut water briefly, but Hiball has been the energy drink company that has led the charge in recent years. Meanwhile, green tea brand Ito En is trying to head energy drinks off at the pass via its newly recently launched matcha colada, combining the naturally energizing effects of matcha with coconut water, as is upstart brand CEO (Clean Energy On-Demand) which launched in 2015, blending watermelon juice, coconut water and organic caffeine.

The addition of caffeine to protein blends is the hottest part of the innovation war right now, with both Monster and Hiball trying to ride increased consumer interest in the ingredient to greater overall sales volume. It’s an interesting place for convergence, and one that Monster has focused on for several years with varying levels of success – protein drinks are dominated by companies like Cytosport and Abbott Labs, while the GNCs of the world have long sold their own blends that have a more technical feel.

Still, for Todd Berardi, founder of Hiball, energy has been the vehicle with which his company has played across multiple categories in its decade of business, from organic energy drinks to sparkling waters to coconut water, to cold brew coffee. Protein’s just the next stop.

“Our strategy is to use energy as the common platform to bring consumers better-for-you, healthier beverages,” Berardi says. “Consumers are looking for options for energy and we want to have a product for any sort of taste profile or need state.”